Now I do like a drink, particularly on a hot day, but not being a fan of beer I tend to turn to Cider for my cold refreshments. Magner's is a crisp Irish cider, known as Bulmer's in the Republic of Ireland it is rebadged for the export market to avoid confusion with Bulmer's English Cider which is commonly available in Australia on tap. 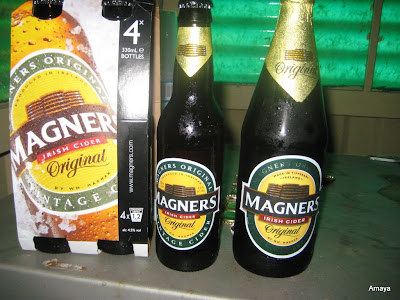 Magner's is best served over ice however this isn't always convenient at the good old Aussie BBQ where drinking straight from the bottle can be common. This makes the 568ml "pint" bottle (on the right) quite unwieldy and frequently warm (or flat) by the end of the bottle. Cider has recently gained quite the following in Australia presumeably due to the large influx of UK citizens and so varying sized bottles are now starting to appear on the shelves including this very convenient 375ml bottle (left) which fits nicely in the hand and is still chill in the Queensland summer heat, perfect for the cricket.
Posted by Amaya at 6:29 PM

Email ThisBlogThis!Share to TwitterShare to FacebookShare to Pinterest
Like my recipes on Yummly: Yum
Labels: alcohol, cider