At this time of year the bubbly gets broken out a lot and being in a happy position to sample a large range of sparkling wine gives me a distinct tasting advantage (and a smug look about me) so here's some highlights of the season. 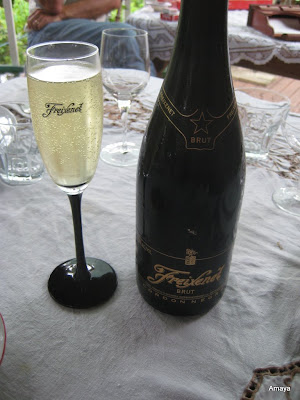 Cava is the Brut of Spain and is a dry sparkling wine of which Freixenet is the most wildly popular. Originating from Catalunya it is made of a uniquely Spanish blend of Macabeo, Xarel-lo and Parellada. Being from the Basque Country Freixenet has been a long term favourite of my family however as import taxes have changed and export scales have grown Freixenet has become increasingly affordable and now can be purchased in Australia from $9 to $20 depending on your location and the scale you're purchasing at. Unsurprisingly this has allowed far greater amounts of it to be drunk over the Christmas period.

While the bubble size gives away some of its price the unique wine blend and the fact that it is fermented in bottle (almost unheard of in this price range) means that it is one of the most affordable quality sparkling import wines on the market. It is crisp, dry and light and perfect with seafood making it a great accompaniment to both northern Spanish food and Australian Christmas fare. 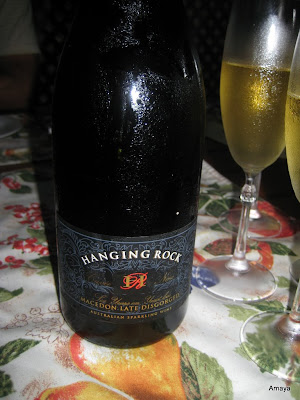 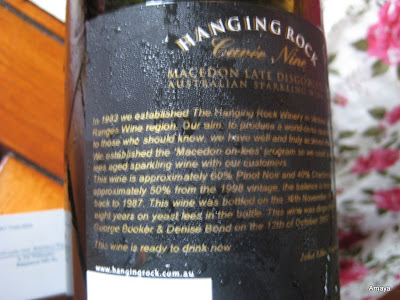 This is a wine noted more for its special occasion ring rather than as a recommendation for one to follow up as my father was purchased lees from Hanging Rock 8 years ago and this was one of several bottles personalised for his birthday. It is a classic Australian Pinot Chardonnay (60/40 blend) with a golden toasted hue. The Cuvee release 7 is currently available on the consumer market and is currently winning a large number of awards around Australia. At $115 a bottle (more for the personalised lees as with this bottle) it remains one of the most expensive wines on the Australian market but the extended aging has a profound effect on the quality and is constantly compared to Bollinger in its taste and quality. Best consumed as an aperitif prior to the meal due to its strong taste and fine quality.
Posted by Amaya at 3:49 PM

Email ThisBlogThis!Share to TwitterShare to FacebookShare to Pinterest
Like my recipes on Yummly: Yum
Labels: alcohol, champagne, wine