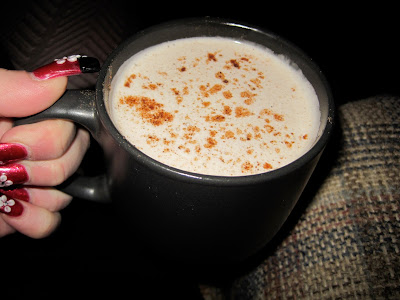 Email ThisBlogThis!Share to TwitterShare to FacebookShare to Pinterest
Like my recipes on Yummly: Yum
Labels: alcohol, recipe, seasonal

Things have been a little quiet because I've been busy at work leading up to Christmas and now am on holiday in the USA. Expect a number of posts on the good, bad and the ugly. 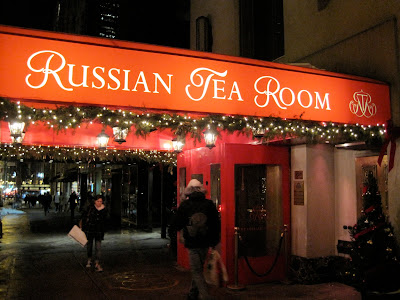 Now we went to a concert at Carnegie Hall and so I just *had* to take a picture of the menu at the Russian Tea Room, however on approach the prices were not as ridiculous as I had originally expected. Obviously then it was time for a post theatre seating! 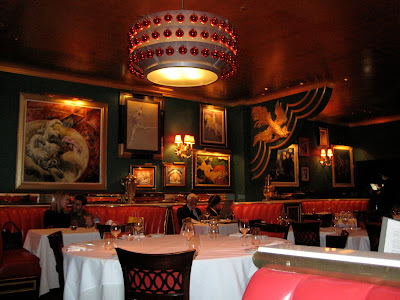 Word has it that since the Tea Room reopened in 2002 that the quality is lesser and the clientele more touristy but fie on them I had a good time (and besides I'm a tourist!) and the overly opulent interior is definitely worth a peek. 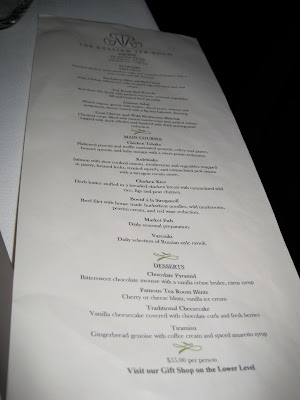 There was a post theatre prix frix menu at a very reasonable $55USD for 3 courses however it was missing many of the items I wanted to try so we went for a la carte. 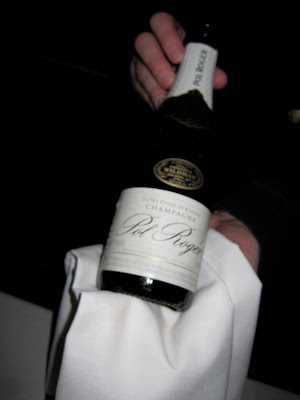 Pol Roger NV Brut $55USD for a half bottle 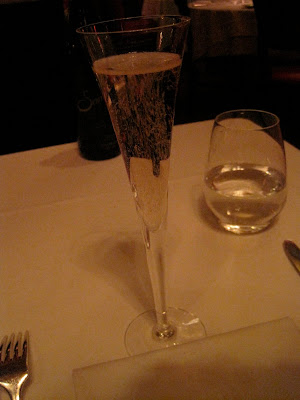 A half bottle is enough for 2 to have a couple of hefty glasses of sparkling and a good size for a meal such as this.

The champagne is a soft bready sparkling Pinot/Chardonnay/Meunier classic of the region, what I love about Pol Roger is the soft fine mousse, far finer than many champagne houses. 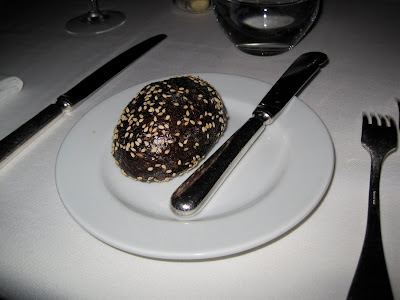 There is a choice of breads included with the meal, this is a dark pumpernickel, done so much better in the US than at home. 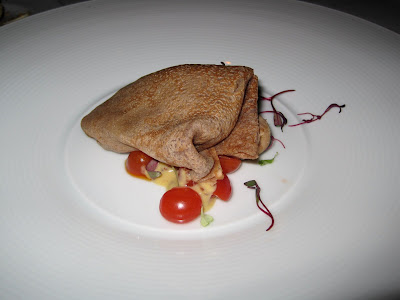 Caramelised onion, mild goat cheese, wild mushrooms and rich duck ribbons in a classic wholegrain crepe. Melt in your mouth and just delightful in the cold. 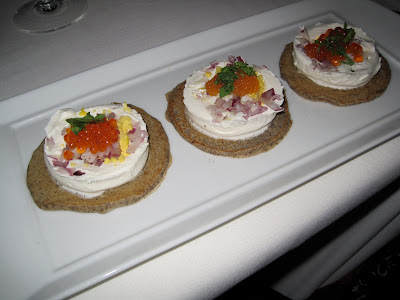 I could hardly come to the Russian Tea Room and not have caviar! Done in a very classic style with blini, creme fraiche, chopped egg and red onion. I am a little disappointed that they are all red caviar types (trout, salmon and white fish) which are quite common at home but nonetheless this is a very solid example of the classic Russian appetiser.

Somehow I forgot to take a picture of the red, given the meats we were looking for a softer red and the Pinots and such were uninspiring so we went for a solid but not excellent Argentinian Malbec at $18USD a glass. 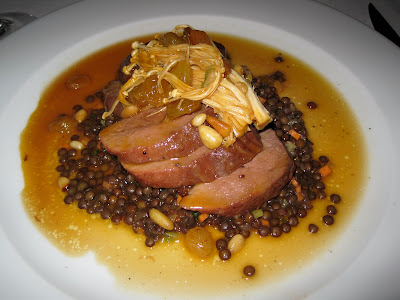 Well the naming of the dish was a bit uninspiring but the dish itself wasn't. Perfect cooked moist duck breast served in an orange anise reduction with plump raisins, enoki mushrooms and a 'beluga' lentil salad. Rich and sweet the sides were a perfect marriage with the rich fatty duck, offset by the lightness of the lentils. 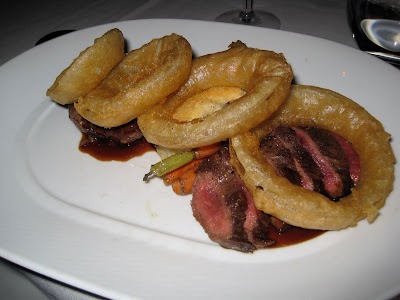 Now I don't understand how they can have "American Kobe" but perhaps the term Wagyu is tainted in the US. The beef was done 2 ways and both served with a light sauce "perigeux" a primarily truffle based sauce with an earthy tang that accompanies this extravagant ingredient. The tempura style onion rings were light and not at all oily, other sides included cauliflower gratin and baby carrots. A very solid dish but potentially a little rich at $48USD when you consider the beef we get at home. 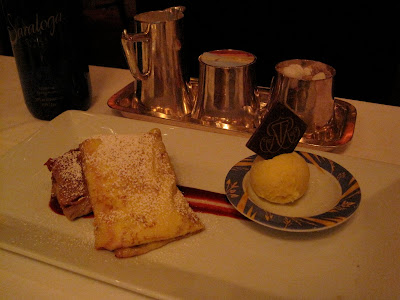 Now if there's one thing I like about Eastern European cuisine over... well just about anything really (though the dumplings certainly are worth a mention) it's cherry and cheese desserts, whether they're Hungarian cottage cheese dumplings, Czech cherry strudels or these Russian blintzes. 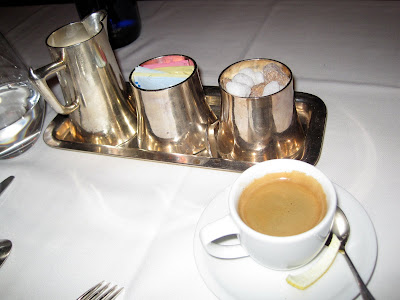 Definitely better than the ubiquitous Starbucks (I mean honestly I have not been able to stand on a street in NYC without at least one Starbucks being visible) this espresso was nice, but $8 for a demitasse cup is pushing it, no matter how nice the silverware is. 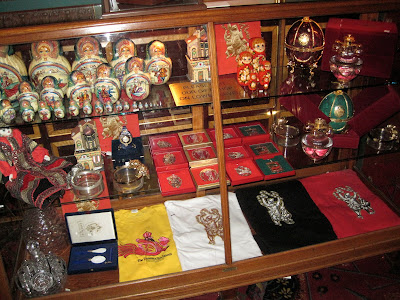 If I wanted Russian souvenirs I'd be planning to buy them in Russia but nonetheless the case of Faberge eggs and Russian crystal vodka sets is worth a peak.

All in all a very solid meal, and more affordable than expected at $140USD a head including wines. The experience was worth the price tag, the surroundings are definitely worth the cost and the food was world class though possibly not mind blowing.

The service was what you would expect of a meal in this price range, though the bus boys were as useless as the waiters were excellent, but I think the same can be said of most US restaurants. I will put this down to the minimum wage laws uninspiring workers.

I would recommend if you are in New York trying the post theatre menu at an affordable ticket entry to an extravagant location, whether you spend more than this is really down to your tastes.

Danks Street Depot is a restaurant with a slow food and sustainable eating twist that leaves the hippies for dust and instead just turns out delicious, heartful and elegant food. Most of the food is locally sourced and there's almost always a story if you can coax one out of the staff. 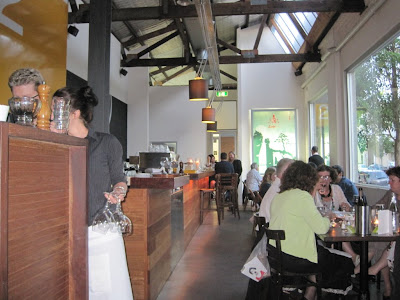 Danks Street have taken to doing bar food nights which are essentially a tapas style dinner with sharing plates on a theme. Given the time of year it was definitely time for a seasonal twist on this event and a modern take on traditional Christmas foods was on display. 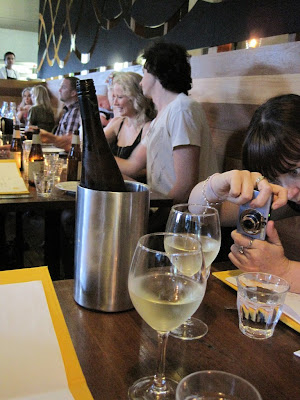 Surprisingly given I am a tragic otaku and computer nerd I had never been into the Capitol Square building. It's a dangerous place filled with components stores, purikura machines and Japanese nail booths. 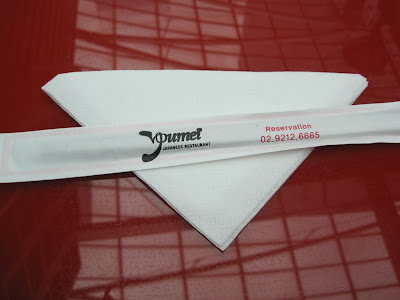 It also contains a Passionflower Asian ice cream bar and a number of Asian restaurants. I was of course immediately drawn to the Japanese restaurant, Yumei. 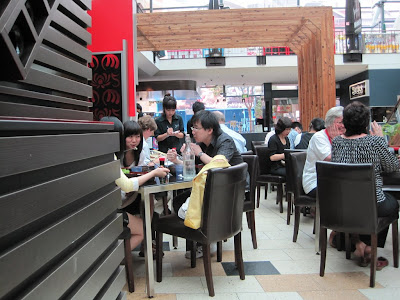 I don't think coming at lunchtime was the smartest of ideas, this place obviously runs off business crowds and local international students running errands. Like many Asian eateries in inner city Sydney there was a bell on the table for attracting attention but the rather large eatery was completely full and it took some time to get attention. When I do get attention the servers are very polite and bring water, menus and offers of Western cutlery without blinking. 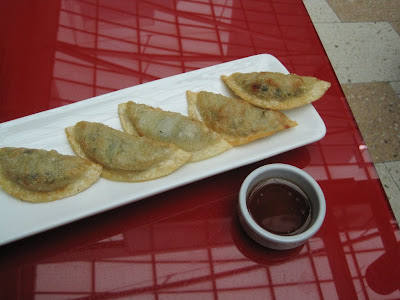 I bought a quick lunch meal of gyoza and a bento; a fairly quick and easy way to judge a local Japanese eatery. I suspect quickly that they have a Korean chef since this gyoza are more like kyoza; fried and filled with rice noodle. They're good, because well all dumplings are good but they weren't what I was expecting and are a little heavy given the katsu dish I have ordered. 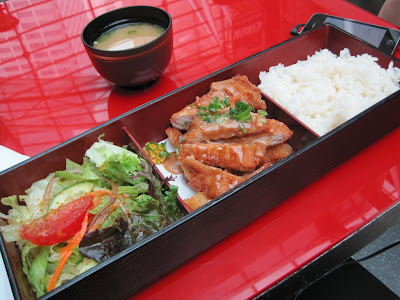 I choose one of the smaller bento and I'm glad I do, this meal is huge, the deluxe versions are the size of a large cafeteria tray and contain many compartments. This one is a slightly sensible serving of rice, breaded pork, salad and miso soup. 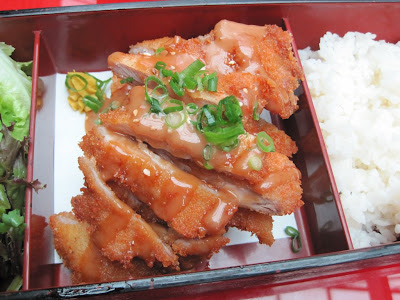 I begin to suspect I'm correct about the chef when I notice that the katsu isn't breaded in panko crumb but standard bread crumb. On the other hand it is perfectly cooked and the tonkatsu sauce is tangy and sweet and highly recommended, much lighter than similar sauces I have eaten. The salad is a nice offset to the fried food and I was a bit nuts about their dressing. 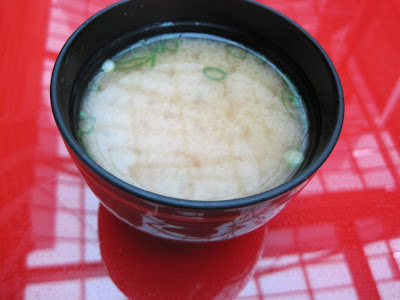 The miso soup is a bit generic but it is good quality, I just would have preferred some more interesting garnishes in it; a Japanese meal without tofu makes me sad :o(

All in all it's obviously Korean influenced but Yumei is a generic but certainly attendable Sydney lunch venue, nothing fancy, still tasty and reasonably priced. I would go early or late to avoid the rush, and sit somewhere you can people watch the locals snapping shots in the photo boths.

Casual atmosphere
No reservation required
Posted by Amaya at 10:26 AM 1 comment: