In Australia festive food tends more towards light cold dishes and seafood owing to the Summer season and tendency towards 35C heat and so reds are often a little sparse on the festive menu however here are a couple of noteworthy items that made their appearance. 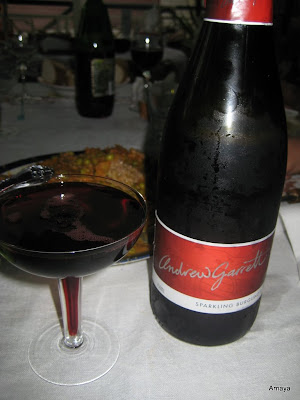 People are often surprised that as a bit of a wine buff I'm a fan of cold sparkling Burgundy (well... Shiraz, but old habits die hard) but really they're a perfect summer red for the Aussie climes. Australia obviously is well known for its strong earthy Shiraz and the heady flavour and strong mousse of Australian Shiraz carry well into a chilled sparkling that can stand on its own as an aperetif on a hot day and makes a welcome change from endless Pinot Chardonnays during the holiday season. This Andrew Garrett sparkling is definitely into the "cheap and cheerful" category as $12 - $20 a bottle but the fruity McLaren Vale Shiraz carries a strong berry overtone and a slight sweetness that is required for a truly successful sparkling red and makes it one of the most popular on the market. Good on its own, great with cold rare beef or Turkey, for something different have as a palate cleanser with berry sorbet.

For a bit of good foodie gossip have a look at the Andrew Garrett litigation, it's a bit of a sad story of someone getting in over their head, marriage disintegration, harassing ex lovers, failed court showings, snowballing litigation, unpaid fines, positively manic business behaviour, frivolous self representation and the big banks steamrolling the whole lot by quite rightly declaring him a vexatious litigant. Andrew Garrett is now made under a licensed name by the Beringer Blass wine company, an arm of the Foster's group. 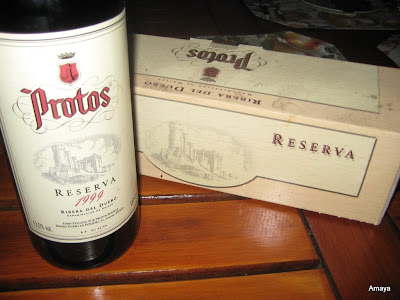 Another special table appearance; some time ago I had a Spanish boyfriend who made all the right moves when he met my parents including bringing my father this magnificent magnum. Sadly the relationship didn't work out, but the wine certainly did. Protos are a traditional winemaker from the Ribera del Duero wine region in Castilla y Leon, Spain, a little west from the famous Rioja region. Ribera del Duero is known almost exclusively for Tempranillo and it is of no surprise that this is a 100% pure vintage. Tempranillo from northern Spain is always soft, subtle and mellow and this bottle is the perfect drinking age leaving it silky with a low acidity. Served with a roast duck this lighter red wine paired beautifully with the gamey meat and the medium length flowed through the food to perfection showcasing the oak and cherry flavours. Purchase where available in Australia and cellar for similar results.

This will end my festive season wine reviews, there were other wines but having consumed a fair number in a short period I forgot to photograph all of them. Most of the others were wines I drink regularly (Grandin, Jansz, Deutz) and so will surely appear at a later date.
Posted by Amaya at 3:59 AM

Email ThisBlogThis!Share to TwitterShare to FacebookShare to Pinterest
Like my recipes on Yummly: Yum
Labels: alcohol, red, wine