I met up with some friends in the city after work last week and we were after something tasty but not too expensive. Korean was my proposal and met with agreement, usually I would have headed to Zozo who have amazing BBQ marinades however they were packed to the rafters and it was at least 30 mins wait. Instead my friends proposed Darling City, a restaurant they had become attracted to after the sign proposed Beer and Korean Food; things they enjoy greatly. 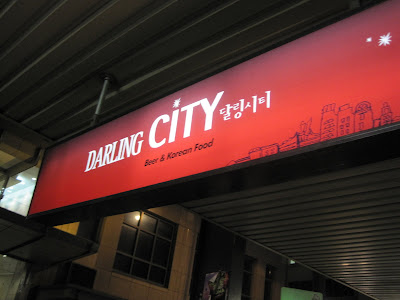 Beer and Korean food you say? We're in! 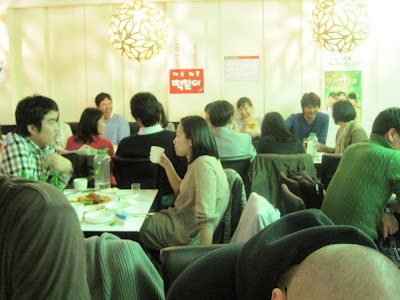 On arrival it has all the good signs for a city Asian eatery, it's lively, its busy but their churn is good enough to guarantee a fast table and pretty much everyone in the entire restaurant (save for ourselves) is a native of the source country.

Darling City is really in with the izakaya style experience, the food is hearty, the drinks are student cheap and plentiful, k-pop plays on wide screen TVs and an entire table of students is having a drinking contest; if you want a quiet night out this isn't it. 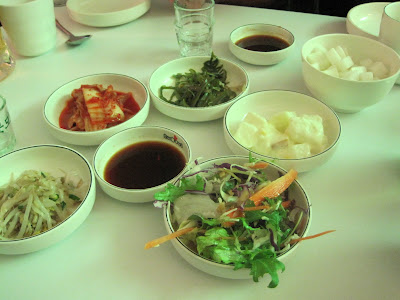 If you're not used to Korean restaurants the appetisers come as a welcome surprise, they're often small titbits of pickles and salad or sauces to go with the food. It's all damn tasty and we are starving, the dichon pickle is amazing and the kim chi spicey and fresh. We wonder if this is a free refill establishment but the other dishes are so large we never get around to finding out. Word of warning: Korean chopsticks are needle thin and made of metal, even the Asian eater with us struggles to eat the slippery potato salad with them.

We take a peek at the other diners' tables and decide to be cautious with ordering; we order 2 entrees and 2 mains between 4 which is more than enough. We should have had an inkling based on the price of each dish but each is huge, filling and well worth the cost. 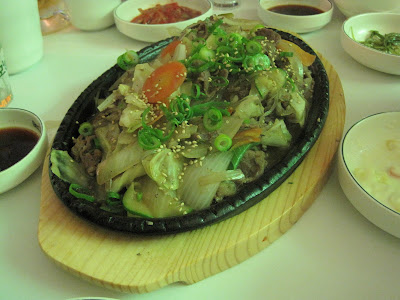 The boy is a bit of a sucker for beef bulgogi, this isn't quite what we were expecting being a variant mixed with translucent rice noodles and vegetables but it is damn tasty and means that we don't require any rice. We all fall straight onto the platter rather than portioning out food. 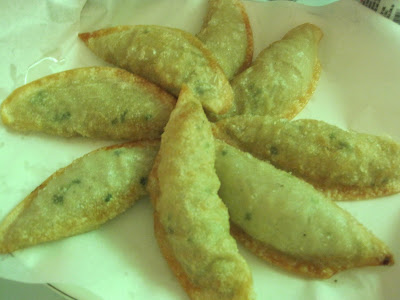 Every meal deserves dumplings; I think the boy was expecting 'pot sticker' style fried gyoza and is a bit disappointed that these are deep fried but they rapidly disappear and happy moans ensue after the tart dipping sauce is applied. 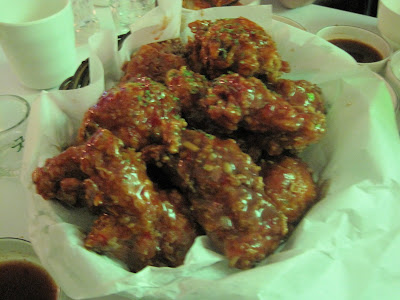 This is one of those simple hearty foods that is excellent with drinks and good even for the sober. A thick spicey batter is applied to chicken wings and deep fried - rather like an upscale version of KFC Hot and Spicy. It's very morish and hits the spot, it's a little heavy but not too oily. The special sauce is discovered to be a mix of ketchup and sweet chilli sauce but it goes well with the simple fried chicken. Our only complaint is that being wings rather than fillet makes it quite fiddly to eat - but this only serves to make us vow to return for the pork version. 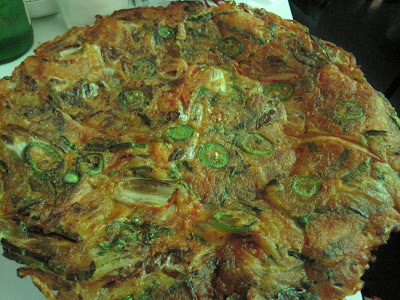 My favourite Korean food is jeon the thick vegetable laced pancake; similar to the Japanese okonomiyaki but without the overpowering oil and creamy toppings. This one is huge, a good 30cm diameter and over a centimetre thick. It is strongly laced with both kim chi and chopped fresh chillis and is not for the faint hearted, my equally food loving friend and I devour it both while our partners look on in amusement. If you don't like spicey food I suggest you go for the shallot jeon since this is hot even for me and I have to keep coming back to it between other foods. Also those not strong with chopsticks really ought to request it be cut up, as pulling off pieces to eat can be difficult. 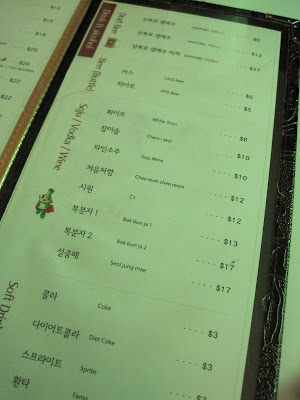 I stupidly failed to get pictures of the drinks, I think mostly because I was annoyed that being on antibiotics my dining companions were slurping down endless cheap tipples and I was not allowed to join in. The boy was shocked to discover an entire bottle of White Soju was only $7 and gave several very strong drinks out of it. Soju is Korean rice wine and more like vodka than wine; you may be advised to buy mixer if you're not used to shots. There is Korean beer on hand but we notice that all the Koreans in the room are drinking Japanese Sapporo ($6 per pint) so the beer drinkers stuck to this.

All in all it's not a high class establishment by any means but it's tasty good food done well and we'll definitely be coming back.

Darling City
http://www.darlingcity.com.au/
379 - 383 Pitt St
Sydney 2000
Next to the City Convenience store on the corner of Pitt and Liverpool St

Email ThisBlogThis!Share to TwitterShare to FacebookShare to Pinterest
Like my recipes on Yummly: Yum
Labels: alcohol, asian, dumplings, korean