There are times in the world when all you want is a good long drink and some fried food; these times are for the Annandale Hotel's Wok'n'Roll Thai restaurant.

I first came across them when I used to attend Cult Sinema a lot however now they run on a Tuesday and it's a lot more difficult to get to but I was always impressed with the thai food on site, it's a damn sight better than your average pub grub. Proper meals run to the standard sort of takeaway noodle affair - choose your noodles, meat, vegies, stir fry sauce and additions and you get a tasty bowl of goodness in no time flat. However armed with a group of foodies content to have a meal of appetisers we chose to do just this; and an endless array of fried morsels while drinking was jsut what the doctor ordered. The Anandale has a similar style event to this every weekend lunchtime called "pub cha" which sounded like an awesome idea but really you need to remember that this is a Thai restaurant and not a Chinese one, and you really shouldn't expect too much out of a pub kitchen anyway. 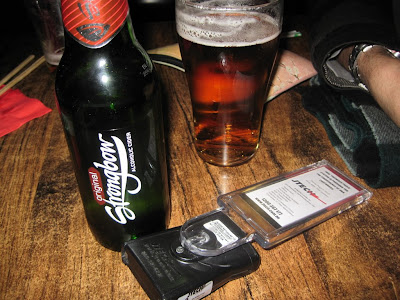 Like any pub food you order at the bar (along with the drinks) and are given an electronic buzzer that informs you when the meal is complete. There's plenty of time in the interim to have a post work drink and wind down. Unfortunately for us there was a gig on in the main room, and this meant having to traverse the back stage area to get cash for the meal. On the other hand the bands seem to expect this kind of thing and no one was too phased by it. 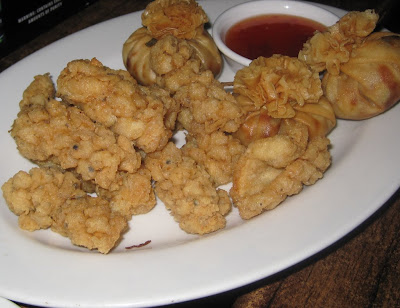 Salt and Pepper Calimari $8 and Money Bags 3 for $7

My friends had had the calimari here before, I'm not much one for squid but anything done in a salt and pepper coating and fried is good so I gave it a go. Sadly these are a little overcooked but not so much they're chewey, the coating is thick and crisp and not at all oily.

The money bags are the real winner for the whole night though, they're large and satisfying and have fresh tasty fillings of pork, prawn, sweet corn and shredded coconut. The pastry is obviously store bought but it's cooked well and using oil that is not only light but tastes surprisingly clean; I think someone in the kitchen is ignoring the rules of dodgy pub kitchens and keeping one they can be proud to cook in. 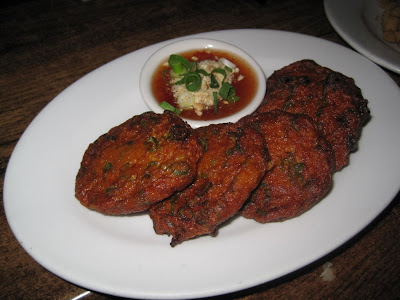 The fish cakes are evidently made locally, if not in house, they're fairly fresh with recognisable vegetables and plenty of taste. My only complaint is that the only condiment provided anywhere is sweet chilli and these would have been better with lemon or even a fish sauced based condiment. 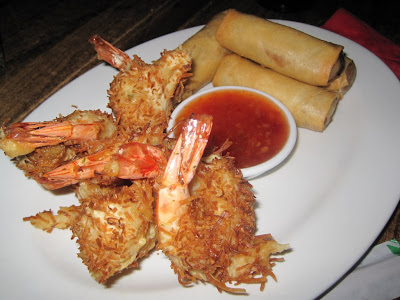 The spring rolls have a lovely seasoned minced chicken filling with assorted vegetables. The filling is quite generous and spiced beautifully, though I'm not often one for spring rolls I seroiusly considering ordering another serve.

The prawn paradise is probably the most sophisticated of our fried delights though; large fresh prawn is peeled and veined, covered in batter and then thick shredded coconut before being fried. The prawns are juicy and sweet inside and the thick coconut batter is just heavenly; hard to go wrong with this dish. 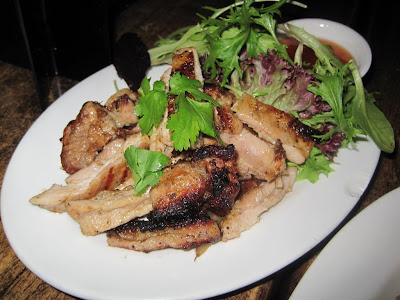 The BBQ chicken is thankfully boneless on arrival because by now we're a few drinks in and not sure we can deal with the fiddly wings we were expecting. Thigh fillets are flattened and basted with a BBQ sauce, grilled and diced before serving. It's very plain food but goes well with the cold drinks and is a standard dish done acceptably well.

My advice is that if you want a few drinks or a relaxing social night out that's not too fancy and has no pressure the Thai kitchen at the Annandale is a great choice. The food is genuinely good and the prices for both food and drink are very affordable, it's a bit rowdy and a bit crowdy and that fight to the ATM can be irritating so you're best off bringing money with you but all in all we leave very satisfied and know that there'll be another trip here in the future.

Oh and a small nod to the hotel itself for being one of the few ongoing live music venues left for the little guys here in Sydney, if nothing else they get my support for that (and the fried food helps ... a bit).

Wok 'n' Roll @ The Annandale Hotel
http://www.annandalehotel.com
17 Parramatta Rd
Annandale
Phone 9565 2334
Use the side entrance for the restaurant

Bookings advised but not essential on most nights
Fully licensed, pub atmosphere, children not accepted
Posted by Amaya at 9:43 AM

Email ThisBlogThis!Share to TwitterShare to FacebookShare to Pinterest
Like my recipes on Yummly: Yum
Labels: asian, pub food, thai