I fell in love with Balzac's melt in the mouth beef and pudding at Taste of Sydney and simply had to try their full menu. Due to my hectic project schedule I had had to delay our anniversary dinner so we had an excellent excuse to visit. We decided upon a degustation to get a full appreciation of their menu. At $130 with matched wines and $85 without it's reasonably affordable as degustations go.

So... Restaurant Balzac as a whole what do I say? I had failed to notice until I went to the bathroom that the restaurant had won a number of hats from the Sydney Morning Heralnd Good Food Guide; which is probably why the staff looked at me so oddly when I said I had not heard of the restaurant at the festival. I'll put it down to me being a relative new comer to Sydney and save embarassment, though I'll admit that I find many of the 2 and 3 hat restaurants are just too wanky to be enjoyable and I tend to scour the menu for a dish that contains neither scallops or foams.

The venue itself is beautiful and I liked the added touch that the bathrooms gave a brief timeline of the history of the building including a very surprising entry in the mid 80s as a Pizza Hut. The wine cellar is quite reasonable, though not at the caliber of a much larger restaurant; the bar staff evidently work hard on their selections and maintan relationships with the wine makers and the existence of a cellar door dinner in their function room was definitely a good sign. The bar staff even let me listen in and try some of their alternative dessert wines which was lovely of them.

On the whole though there was as slightly off edge to the service. We were served by several people, incuding what seemed like rather random entrances from function and kitchen staff bringing dishes. Some of them were excellent, unfortunately the girl we had most of the night was quite off; her rounded service was entirely lacking and she seemed if anything to be a little arrogant about working there, without stopping to realise that we were the ones paying to eat at the restaurant. She forgot items, failed to see handsignals and her notes on the wine were emotionless and read from an internal autocue, if I were a betting woman I'd put money on this girl being a wannabe actress trying to rote learn lines from the sommelier, but if her Stoppard is anything like her service she's not going to make the movies.

I think our biggest issue with Balzac is that the boy and I have specific tastes and we're often privy to excellent food; we like warm real food, served by warm real people and Balzac missed something in this note. At other degustations we have had responsive service, wines changed, dishes explained with a passion linked to the food and that was missing here. I would hazard a guess that this was a real gem that has gotten lacklustre through fame and good reviews, and it's now a real cut above many restaurants but it was a step below the other "hat" restaurants we've attended and were surprised to see that it had retained its 2 hats last year based on our experience.

The boy would obviously have preferred another night at Atelier, but you can't have the same degustation every time, and I think his disappointment was born mostly out of being spoiled. I would definitely try Balzac if you like fine food and a good degustation however I for one am more interested in trying their other establishment The Burlington to see if it retains a little more "soul" with its casual dining claim. 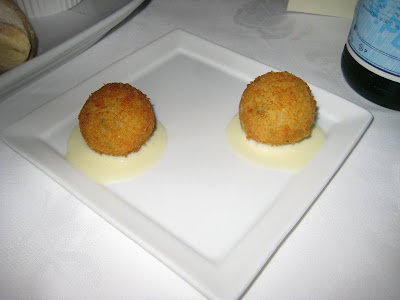 I had this with a glass of Pelorus NV Pinot/Chardonnay sparkling from New Zealand though it was not included with the meal $14. This was lovely and light and a wonderful accompaniment to my sparkling wine, it is only a shame that a sparkling is not included on the matched wine lists. 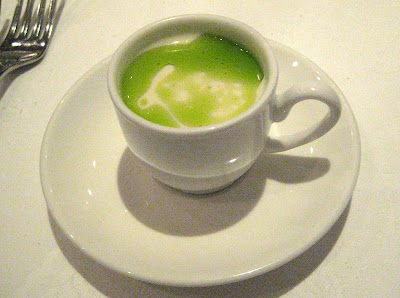 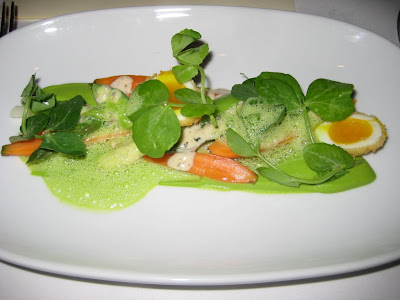 I had this rather odd moment with the waitress where she mentioned that we were able to change the menu at will and then seemingly objected when I asked for an alternative to the gravlax and gazpacho dish. Her tone sounded almost offended, she then offered to serve the dish without the fish and when I said that if this was the only alternative I would prefer they brought the original dish over she seemed put out. Eventually I feel someone in the kitchen must have said something to her about this being inappropriate because she came back later to say that they had offered to put this fresh light vegetable dish together instead and I'm glad they did as it was well suited to my palette and struck just the right note of fresh colour.

Unfortunately the Austrian Gruner Veltliner (1997 Nigl) that had been matched with the fish was far too strong for the vegetables but nonetheless I do like to try interesting varietals on occasion. 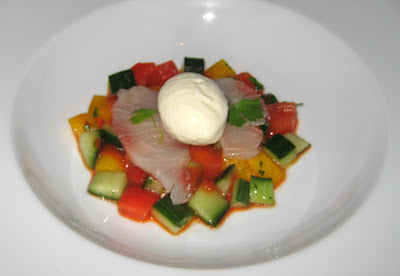 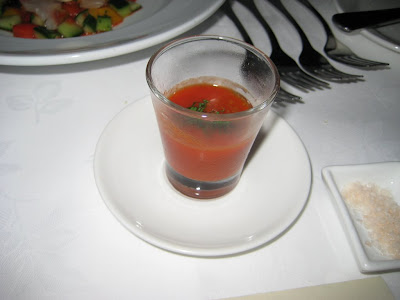 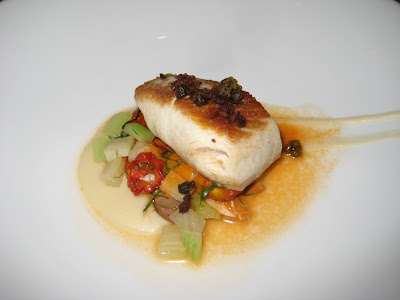 I'm not sure you could have asked for a dish that was more suited to the boy, especially the freshly prepared semi dried tomatoes. The meaty flesh of the fish went well with the French pinot gris, though French pinot rarely suits my tastes. 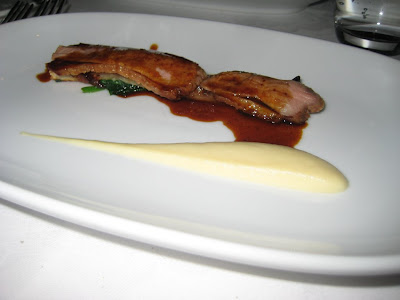 Then it was my turn to have a dish almost custom built to my palette. I wish somewhat that the menu was slightly more descriptive on how the "tarte fine" was built. It was some form of caramelised fig sitting on a butter or perhaps even lard strip of pastry. Both items had taken on the duck fat and sweet madeira concentrate of the jus and had me in eye rolling happiness. The wine was a slightly unimaginative but still very good 2006 Yarraloch Pinot Noir; negative points to the waitress for bringing this out as soon as it was poured as it really needed a few minutes of air and a little warmth before it reached its full potential, something she should have known (or the cellar keep warned her of) with such a young pinot. 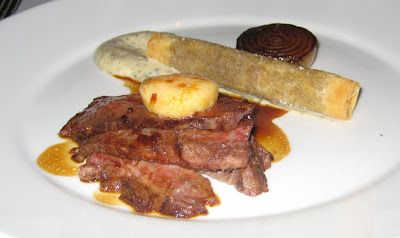 Based on the festival I was really looking forward to the full extent of this dish however I'm not sure they've failed to play to the strengths of the food here. Firstly the braised shin portion was significantly smaller than when it was served on its own but also I think they really did this wagyu a disservice by its plating. The meat had been sliced fairly thinly and I'm unsure if it was left to cool too long or simply sliced too fine but by the time the dish was served to us the fat had solidified and was almost gelatinous in texture, served with a glistening circle of its own marrow this may have delighted others but to me it was merely a little over done and perhaps only of interest to those who do not have ready access to kobe/wagyu of high marbling counts.

Before I dismiss the dish too far though I must say that the truffle puree, the bordelaise sauce and the aged shin were to die for and saved the plate for me. I played havoc with their tastings and chose the wine they had matched for the Pork to be served with the Beef (2007 Castillo Del Baron Monastrell, Yecla, Spain) however I do love Spanish wines and I have a soft spot for the northern monastrells (mourvedre to you). 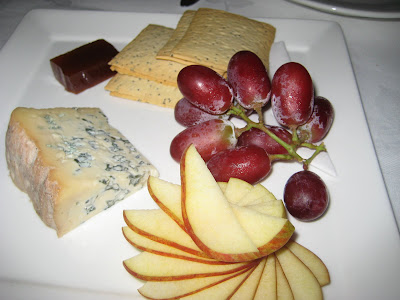 I was really looking for a "down" note to the meal at this stage though I couldn't have stomached a whole cheese plate, so we ordered a single blue. This was a creamy cow's milk blue from Piemonte, Italy the name of which escapes me entirely. I ordered a Portugese port with this (not on the matched wines) which annoyingly the waitress forgot to tell me the label of and is missing from their online wine list. The table next to us did order the entire platter and I'm glad I didn't as it was ridiculous. I must note the use of this pear paste with the blue cheese as it was excellent together and I usually use quince paste. 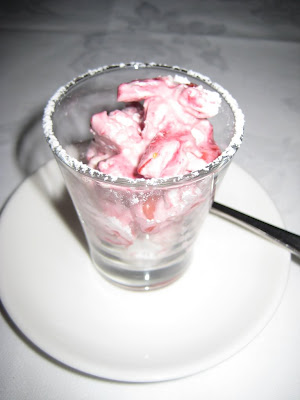 I really prefer a palette cleanser at this stage of the meal and it is lucky I have an incredibly sweet tooth because this sugary concoction was a real hit on the palette after the soft tastes of the meats and wines. The boy was unable to finish his and gave it to me, though this was more to do with the choice of strawberry than the sweetness. Knowing his distaste of strawberries I asked why he hadn't asked to have it changed when I altered my entree and like a boy he had been too distracted by the meat to even notice the sweets. 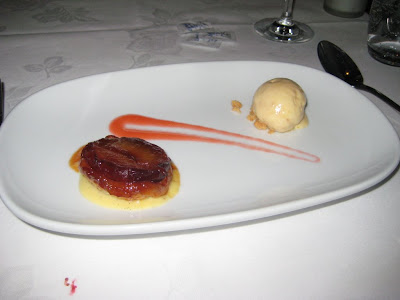 The boy was in general disappointed with the sweets though this was definitely my kind of tastes; caramelised fruit with nuts and creamy sauce? Beats the hell out of chocolate any day of the week. This came with a 2007 Josef Chromy Botrytis Riesling dessert wine; I so rarely order either dessert wines or anything even hinting at a riesling though this was quite nice. To be honest though it needed to be in a smaller serving as it got a strange almost petrol like nose as it warmed. 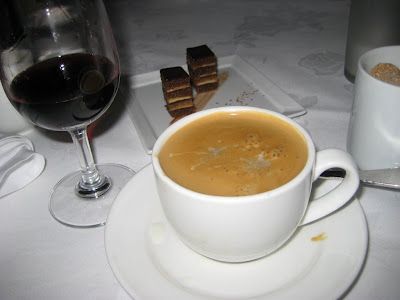 Hot beverage course: Petit fours of Gateau Opera, coffee and the remains of my port

Thanks to my father and grandfather I believe that coffee at the end of a big meal should always come with a strong port or stiff cognac so saved the remainder of my glass from the cheese course for this part of the meal. The coffee was good, strong, well made and made properly to order. Unsurprisingly they had no soy milk however I'd come loaded with a handbag full of Lactaid so that I could enjoy the cheeses and sauces without worry. The gateau was a liquer soaked wonder that was so rich it didn't actually need the top layer of ganache. Thankfully the portion was only about the size of a lump of billiards chalk or it would have been troublesome.