On the rare occasion I get a lunch break long enough to be away from the office I eat at this place in Macquarie Park; The Great Bagel and Coffee Co. The premise is fairly simple, a large range of bagels and schmears and bagel sandwiches.

Once upon a time places like this were on every second corner in Brisbane but the low carb diet fad killed off every Bagel place I knew about. This made me rather sad as bagels are one of my favourite foods due to my carb junkie status. The impression I get is that this is an American chain but I've never seen another (though Google claims there are more in Bondi and Waterloo) and the entire place is run by bustling Asians. Due to their nebulous age I can't tell if they're international students who attend the local university or if they're the owner/managers who have bought into a franchise. 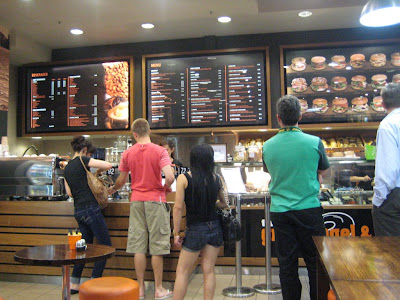 The menu contains a number of filled bagel sandwiches, from just a bagel and cream cheese, to classic American sandwiches, Bagel Burgers (I'm never game because they look amazingly filling) and Australian/Californian fresh salad fillings. You can choose from any of 14 bagel varieties and a glass cabinet full of fillings or one of their pre-compiled suggestions. A standard "bagel and schmear" with freshly mixed cream cheeses will set you back $4 but they're well worth it and they don't skimp on the cheese. Most of the "gourmet" filled sandwiches run from $7 - $10 which is on the high but not unheard of side of lunch prices in Sydney. 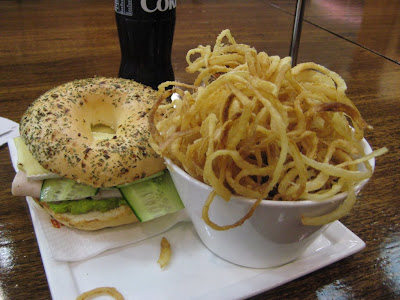 Here I've ordered a fairly classic sandwich combination; Roast Turkey, Avocado, Brie, Cucumber and Cranberry Sauce on an Italian Herbs bagel. When it arrives it comes with a huge knife to cut the bagel in half. This is probably the smallest I've ever seen the filling and it's still enough to stuff you to the gills.

The onion rings here are potentially the best that I've ever had. I find most onion rings in the breaded style far too heavy, these however have been lightly dusted in flour only before being deep fried. They are crisp, sweet and fresh; though they are somewhat oily so I never make it past half way through the bowl. At only $3.50 for the bowl though I never mind, and they're so good that every time I order them some put upon parent glares at me as their child demands they get their own bowl immediately.

I also really like that they have classic glass bottled diet Coke as I'm trying to reduce the amount of plastic bottles I buy and only buy softdrinks in glass or aluminium where possible. Besides Coke just always tastes better in glass... it's something to do with the level of carbonation maintained.

It's not really the cheapest take out meal for lunch but it always makes me feel better when I'm feeling down. I always feel at home on the big long benches in the store as they're filled with other like minded corporate types reading the paper and pawing over laptops. Highly recommended.
Posted by Amaya at 5:03 PM

Email ThisBlogThis!Share to TwitterShare to FacebookShare to Pinterest
Like my recipes on Yummly: Yum
Labels: fast food, reviews