Readers of this blog will know how much I like Korean food, but what then is my fallback, the restaurant I go to time and again? It's this one BBQ City, a rowdy staple filled to the brim with Korean students and their families merrily chomping away.

Like many of the best restaurants in Sydney it's not at ground floor, look up opposite the entry to World's Square on Liverpool St. 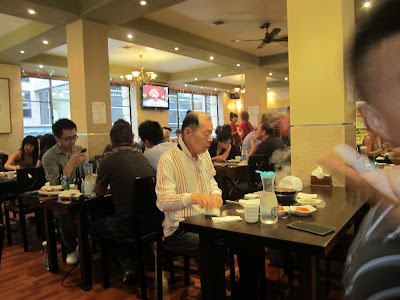 BBQ City is not the place to go for an intimate meal, it's rowdy and has a party atmosphere with lots of clatter and an army of staff. If you're looking for an informal dinner party or a shared team outing however it's a great option. Rather like yum cha the more people you add the better the experience and the wider the variety of the food.

There is a party room if you're so inclined but it books out in advance so be prepared to book it early and for tables of 10 or more only. If you do get it it's a formal Korean dining room rather like a tatami room at Japanese restaurants so be ready to shed your shoes and sit on the floor. 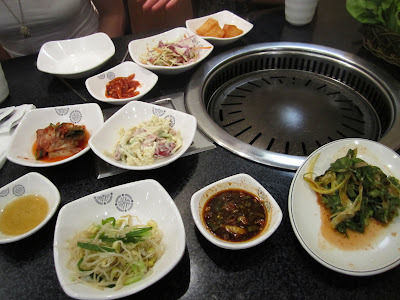 Assorted banchan - included with the meal

Banchan at this restaurant are varied, seasonal and can be refilled on request. There's usually some form of fresh seasonal vegetables such as radish or sprouts, a potato or pasta salad and the ubiquitous sweet simmered potatoes. 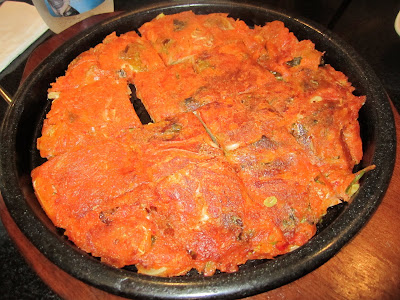 The kim chi pancake is rather thick and heavy, no light start to a meal but crisp and not oily with plenty of chilli kim chi. A spicy vegetarian delight. 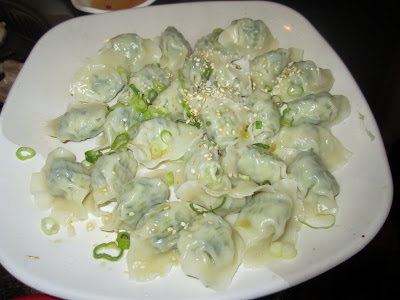 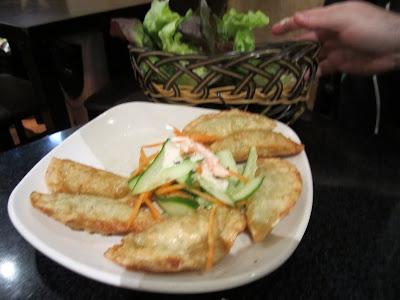 The dumplings are akin to Japanese gyoza filled with pork, chives and glass noodles. They can be ordered fried for those drinking or boiled for those who are calorie conscious. They're both excellent and served with a umami dipping sauce that I tend to want to put on just about everything. 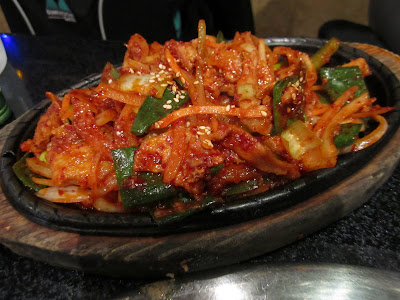 Chilli and fermented soy beans are stir fried with onion, carrot and large slices of green sprouts. This is moreish and the fermented soy adds an excellent umame savouriness that has me coming back for more time and again. It's particularly excellent served with the Korean plum wine and rice. 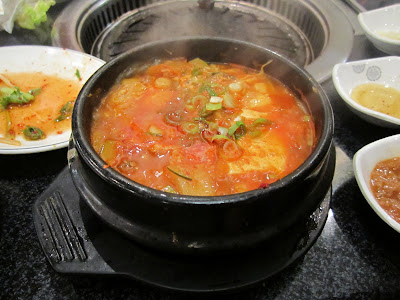 
Most people in the west associate Korean food with meat filled BBQ madness however most peasant dishes from Korea are vegetarian. If you can convince a vegetarian to come and watch you consume the meat dishes at BBQ City there are plenty of options. This hot pot is steeped in chilli and vegetables and makes a satisfying if adventurous dish. 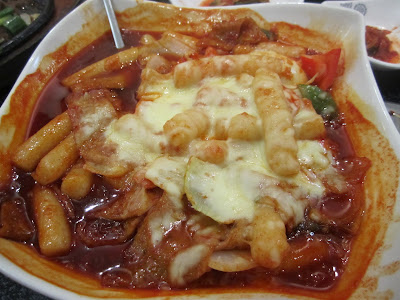 This bowl is huge, enough to feed 3 on its own comfortably. You can choose to have it cooked by the kitchen or have them bring you the hotpot to cook yourself. While not my favourite rendition of this dish - Best Friend and Darling City take this crown for me in Sydney - this is definitely a solid rendition. Thick sausage like rice cakes similar to a gluten free gnocchi are served with fried fish cake, capsicum and carrot in a sweet ultra hot sauce and topped with cheddar cheese. Delicious - but sometimes regretted after the fact!

If the dish prices look steep please be aware that they are very hearty and not designed for one person, this is where having a large group comes in handy since the meals are mostly 'family style' and designed to be shared.

But while I love some variety in my food surely you come to BBQ city for the BBQ... 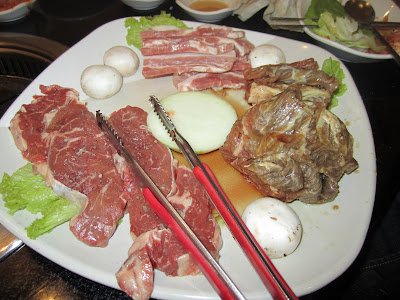 This is intended to share and this picture is after an entire BBQ has been filled with meat. There's easily enough meat to have 2 people eat 2-3 rounds of ssam or a larger group to each trial the meat. You can order meat dishes separately for around $18-$22 each. If you're taking this option I would recommend the pork marinated in wine, the kalbi marinated ribs and the thinly sliced pork neck. Alternatively for large groups I would recommend 2 meat platters to ensure everyone eats their fill. 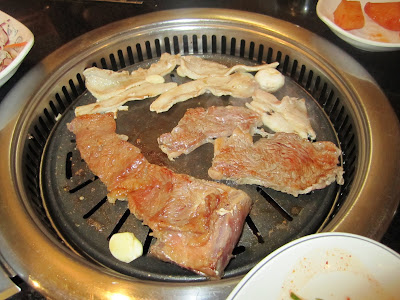 The meat is cooked on small gas filled BBQs set into the table. I prefer to cook my own and this restaurant will happily leave you to it if they can see a leader performing the role well. If you're a little trepidatious they will cook it for you on request. Note the rolled out kalbi ribs with the bone still attached, just delicious! Mushrooms, onions and whole cloves of garlic can be added to enhance the experience. 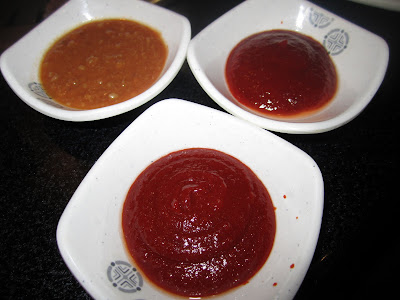 Here you can see three sauces, the light brown sauce is the standard ssam sauce which is partially mashed fermented soy beans. I've also asked for two types of chilli sauce, one which is a sweet hot sauce which may appeal to those that like American BBQ and the other is gochujang the hot hot hot sour chilli sauce that brings much of Korean food its flavour. 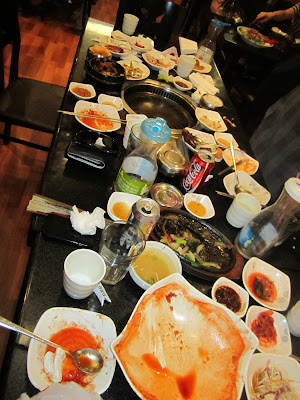 This is the sign of a Korean BBQ attended properly and with gusto. Lots of dishes everywhere and not much food left in sight!

This place is great for a party, they serve plentiful Korean and Japanese beers (including Sapporo and Hite for $8), bottles of soju for $12 and Korean Plum and Raspberry Wines at $22 a bottle. Highly recommended.

I eat out a alot, I explore restaurants a lot, and this is a favourite; not particularly outstanding in the world's food but a great example of its cuisine and solid in both food and service. It's good for a large party but not good for a quiet date. Unless you're super keen on Korean food as I am this is a terrible choice for summer since the number of people, the hot BBQs and the chili laden food make this an adventure in sweat during the Summer months. Doesn't stop me though... I just order more beers and carry a folding fan.