There are a number of restaurants on my 'food tourism' list that I slowly tick off as I travel the world and Nobu has been on this list for some time. 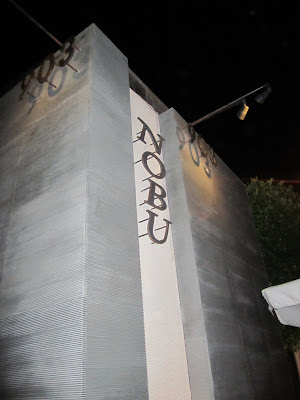 Nobu is the Japanese Fusion food mecha known more for its celebrity owners than its cuisine which is a shame since the food is amazing and unlike some other food tourism meals was everything I hoped it would be and more. I can say quite comfortably that this was one of the best and most memorable meals of my life and I shall be seeking out other Nobu locations for comparison.

The Los Angeles location is the home of the proprietor and much celebrated Chef Nobu who conveniently was in the kitchen on the date of our visit.

This was also Restaurant Week in Los Angeles; there was a special set menu and the option for an omakase chef chosen tasting menu but my knowledge of Japanese food and the palettes of my fellow diners meant that I custom chose our menu from amongst the dish types. It is worth noting that the Omakase chef's tasting was $150USD and our personally selected meal came to just short of this per person including a bottle of Piper Hiedsick NV at $75USD. If you have a member of your dining party who is familiar with such a menu you may wish to choose your own meal rather than have the chef do the same. The adventurous may wish to trust the chef, be sure to explain your allergies and tastes!

Nobu like to do their rotation in an unusual fashion and put the sushi/sashimi at the end rather than the beginning but as I like to leave any dish of toro till last this was fine by me. 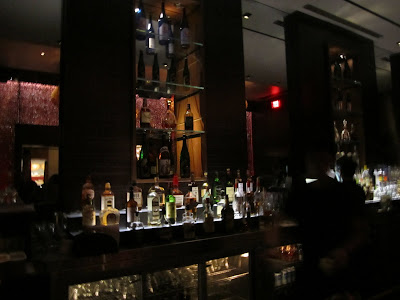 We arrived early due to the chaos of Los Angeles traffic and so sat in the bar for a drink before dinner. 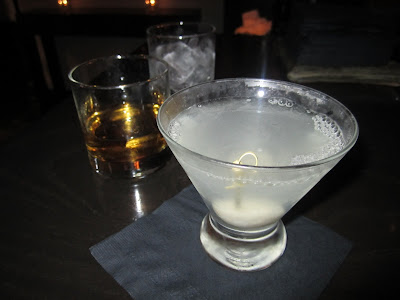 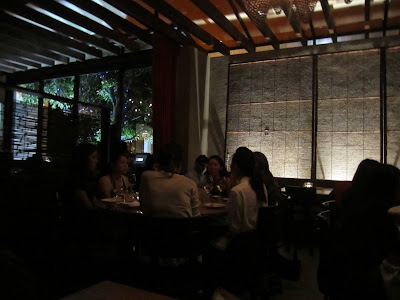 The dining room is subdued Asian stylings with heavy emphasis on privacy screens, presumeably to hide well known patrons from each other. Unlike other LA restaurants though Nobu seems to attract actual food fans and so there is a lack of the Size 0 brigade I have seen elsewhere which I am thankful for, the poor girls just make me want to feed them. 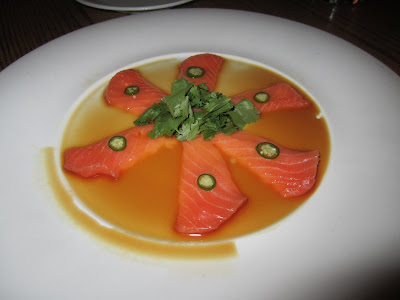 
This is Asian fusion done just right, in fact when the waiter explained that they are a fusion restaurant rather than pure Japanese I remarked "Oh well Yuzu and Cilantro were made to be together" and then found this on the menu. I was not let down, it is a food combination which always delights and combined with the delicious sashimi and spicy pepper was entirely memorable in a small bite. A great sign for the rest of the meal. 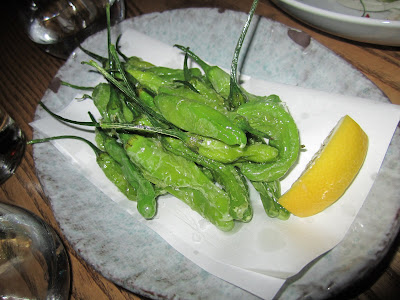 
My partner is very fond of hot food and had enjoyed the shishito at Inakaya so I ordered this. They were lovely and fresh however inconsistently hot and so we opted not to finish the entire dish of peppers for fear our palette would be ruined for the subtle food in the rest of the menu. 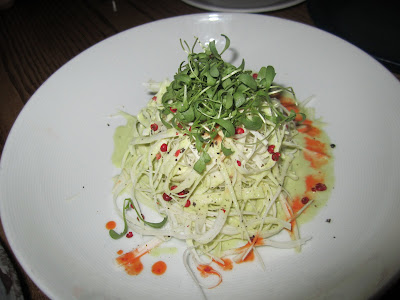 
After the spicy peppers this cold dish of shavings of heart of palm with pink peppercorns was a real refresher. Heart of palm is a favourite ingredient of mine often found in my father's pantry and glad to see it appear on an Asian Fusion menu. 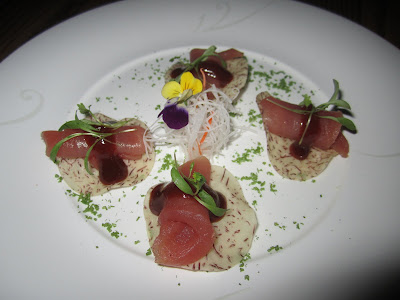 This is one of those dishes that is so good, so perfect, such a delight in one mouthful that you think about it for days to come, that all the diners at the table pause and close their eyes when it is mentioned. A sliver of taro perfectly crisped is topped with a spicy fermented miso sauce and a roll of immaculate quality raw tuna. Amazing, a mouthful worth a visit to the restaurant alone. 4 pieces for 3 diners though? Dangerous 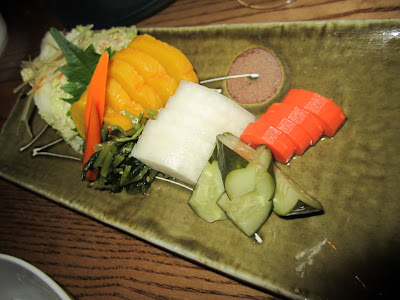 
It may seem funny to order pickles in a fine restaurant but I can't fathom a Japanese meal without them. These were all obviously made fresh on the premises and included a standard daikon, fresh water radish, carrot, cucumber, cabbage and an Asian spinach. Deeeeelicious! 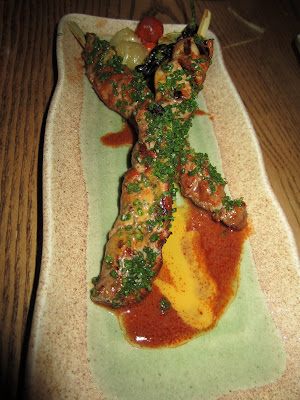 Good quality marbled beef is basted in a sweet mirin and umami filled fermented soy base and grilled to perfection. So good we ordered a second order of this dish. 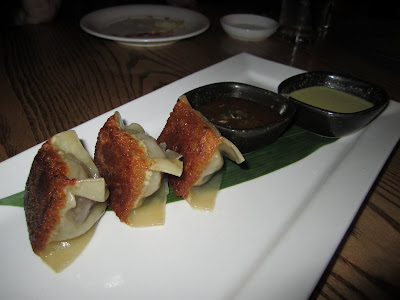 
As a woman obsessed with both Japanese food and liver I don't know that you could possibly tailor make a better dish for me. This was without a doubt the best dumpling I have ever eaten and the dish contained everything one could ask for in textures and tastes. Silky light dumpling skin was crisped to perfection, rich meat and smooth liver set off by a tangy Jalapeno dressing or a sweet caramelised garlic and ginger sauce. Unforgettable, and again; we ordered another of the same as soon as these were eaten. 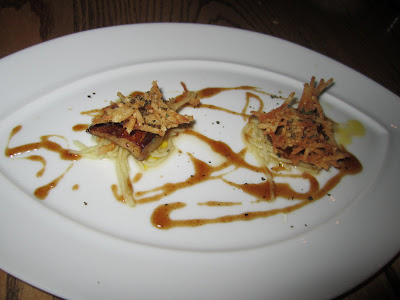 
My partner fails to see the light when it comes to foie gras so there were only two bites but I cannot pass up any chance for real foie gras, banned in Australia and with a texture that sadly no humane feeding technique can reproduce. Shavings of fennel and apple are soft and crisp in turn with a sweet sauce, gone in a second but delightful nonetheless. 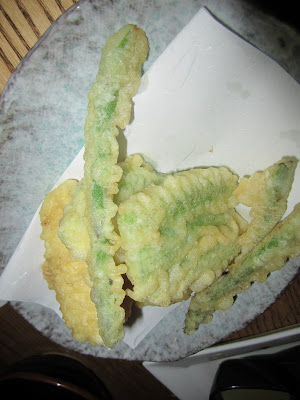 
Asparagus and Sugar Snap Peas are my favourites and unsurprisingly this is a fantastic rendition with light batter and not too much oil. There are any number of other seasonable vegetables on offer here and you could easily order a large meal of just tempura to appease the vegetarians. 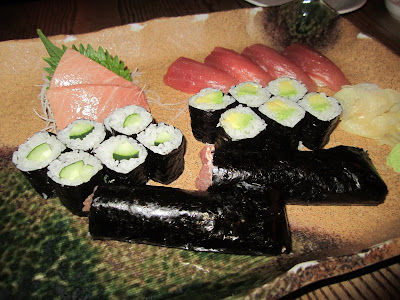 
The quality of the seafood doesn't fail to disappoint in the sushi course; the only let down here is that the hand roll is performed somewhat like hosomaki rather than the conical shape I am used to in Australia and Japan. This means that rather than the seaweed being crisp it is damp and clings to the sushi rice making it difficult to chew when it is multi-layered.

On the other hand the vegetarian rolls and delightful and light after the rest of the meal and the tuna is mouthwateringly delicious. For those who question the cost of two small pieces of fish I urge any foodie to purchase high end toro at least once, the fatty tuna belly is unlike any other sashimi you will eat. Like any good tuna the toro here lingers in the mouth after the fact and I am loathe to give up the taste to another dish... but there's dessert to be had! 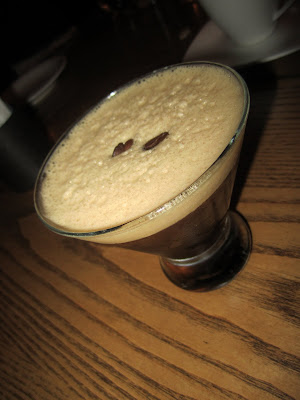 Real coffee a rare delight in the US is made into a refreshing after dinner drink, not too bitter not tasting strongly of alcohol. 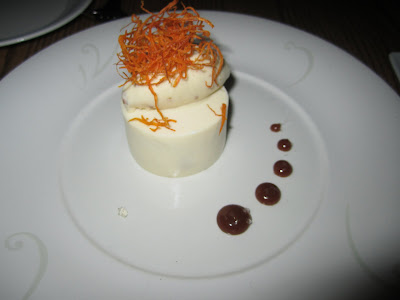 A soft cake is surrounded by a soft cream cheese icing and topped with a ginger ice cream, accompanied with a salted caramel. Amazing. 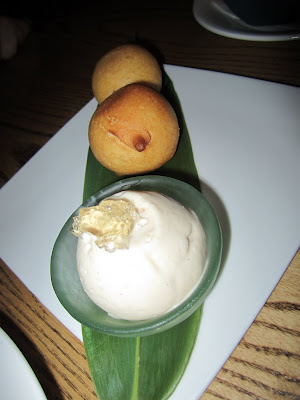 I'm a sucker for peanut butter everything and the Americans really know how to treat their nut products but after a taste I'm glad I didn't order this as it was rich beyond compare and would have sat heavily after the light and floating meal. Light Japanese style fried dough is injected with hot peanut butter and dark chocolate sauce, accompanied by peanut butter ice cream topped with an ume shu jelly. An inspired fusion dessert. 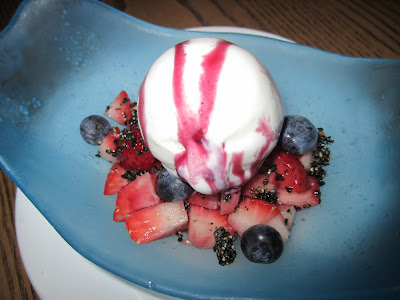 Well... what do you say about a meal like this? Delightful, inspired, delicious and matched with immaculate service and surroundings. This is a restaurant worth travelling for and with locations in Europe, the Americas and the Asia Pacific one needn't go too far.