There is something so quintessentially American about the 50's diner eatery, isn't there? Make it in a strip mall in New Jersey and you're really just icing the cake. Cheeburger Cheeburger is the oldy worldy diner done well and in a country where food additives and Z grade meat products appear norm the organic beef and home made fries are a little haven of good old fashioned burger joint. 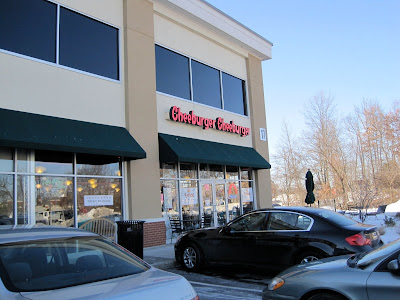 The interior and service are all Americana gone crazy. We're met at the door by a greeter and transferred to a food server, who takes us to a bright blue vinyl and chrome setting. We're given menus and look a little confused at many things but they spot the accent and have a little "aaaah so that's it" moment to themselves. 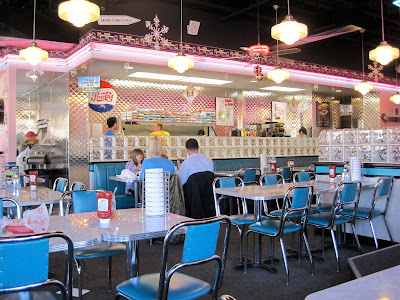 Now I'm sure there are other worthy items on the menu, but the whole point of Cheeburger Cheeburger is the custom built to order Cheeseburgers. 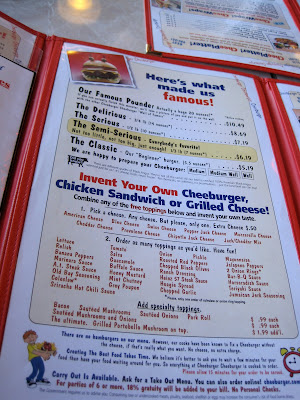 Choose a size, a cheese and as many of a huge range of fillings as you want all for a set price. Want it mexicana? Add jalapenos, guacamole, cheese and salad. Want it SouthWestern? Throw on some grilled onions and smokey BBQ (... and maybe some bacon om nom nom). I find it hard to beat the classics though; swiss, pickles, ketchup and mustard. Tasty good!

I would have really liked it if they'd had some "suggestions" for taste combinations though, I got totally overwhelmed!

One of the things I really like in America is that they offer to cook your meat to order as you would other meats; so you can have your burger patty pink and moist or burnt to a crisp, it's totally up to you! 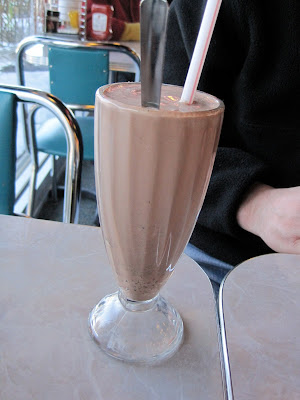 Cheeburger really loves it's "choose it yourself" attitude. The shakes come with an entire page of flavours that can be mixed and matched for a theoretic 378 000 flavour combinations. This is a double chocolate shake so thick the straw stands up dead straight and becomes a hindrance to finishing the actual meal. 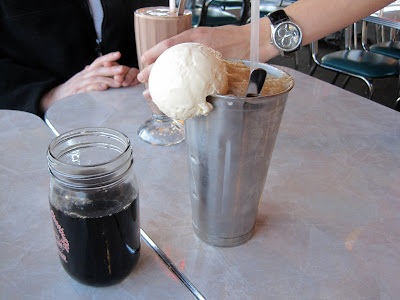 Really though, I can get good shakes at home (bring me a Burger Fuel Soy Vanilla Malt kthxbai!) so I opt instead for a Dr Pepper Float. Two giant scoops of rich creamy Edy's vanilla ice cream are thrown into a mixer cup full of Dr Pepper, and I'm given a side dish of soft drink to add to my float when I run out of liquid. This is important since the scoops of ice cream are the size of my fist and could never be finished with just one cup of drink. 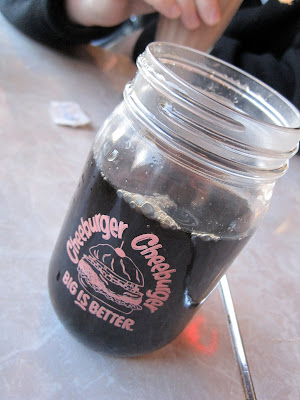 In America drinks are endless for your money, and the ratio of syrup to soda at this store is much better than most places I've been to. Sadly there's no Diet Dr Pepper on tap but endless Diet Pepsi to wash down the giant burger doesn't go astray. The addition of the quaint Mason Jar glass makes me smile.

Now you have to keep in mind that the Cheeburger Cheeburger tag line is "big is better" when you view these burgers. 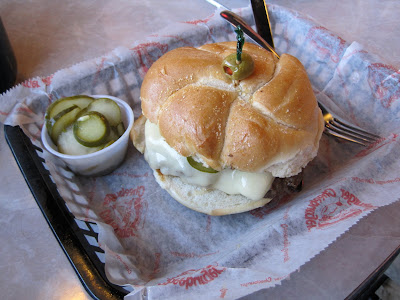 It's the second smallest burger on the menu at 1/3 of a pound, for reference this is the same size as the C & Cheese at Burger Fuel ... still a monster of a burger IMHO. I avoid loading it with too much so this is just double swiss, extra pickles with ketchup/mustard to add at tableside. It's picture perfect and the patty is just right! The bun is a great type for a burger too, chewy but not too fake, not crusty and with a 'real bread' density; in general the quality of bread in the US isn't great so I'm very happily surprised by this. 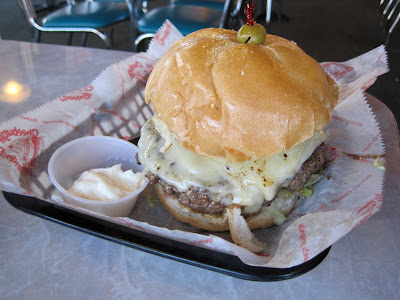 At 14oz this is no less than 400g of meat prior to cooking. Think about it. It's ordered medium and with salad and chillis. From the eye rolling finger pointing goodness I take it to be excellent but after ice cream laiden drinks and with sides we are all clutching ourselves painfully by the end of the meal. 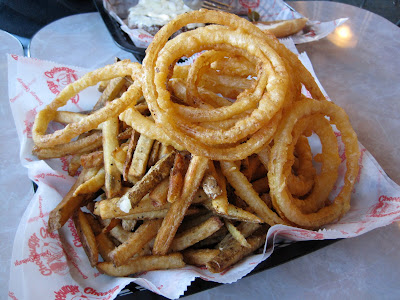 Home made 'dirty' fries with the skin still on and giant delicious morish onion rings all cooked in light peanut oil. They were damn good but the burgers were so big I couldn't finish.

Now... these burgers were so damn good we just *had* to go back before I left the States. This time we had a plan! No shakes, sodas only, onion rings for the goth, fries begone! 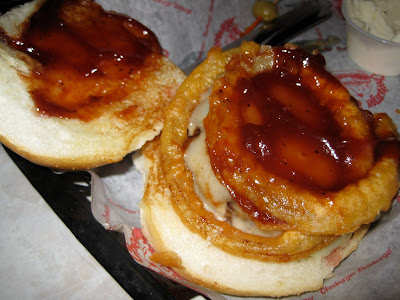 I stick with the size I know I can eat. After some experimentation I can highly recommend this combination - medium patty, smokey BBQ sauce, double Swiss cheese, onion rings, side order of mayo. Oh god, table thumpingly good.

And for my friend... it was time for the challenge meal. Oh god. The pounder. 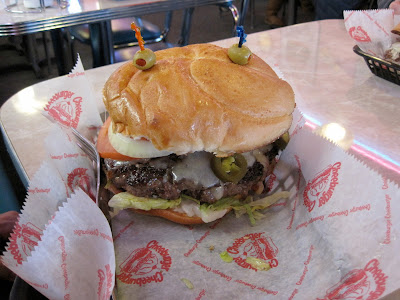 When it comes out it looks more like a cob loaf than a roll. It has to be held together with more than one stick. For unknown reasons it has been ordered loaded with salad and double cheese. The eyes of the diner widen to take it in and the eating starts. It's a little offputting to watch, and my friend requires multiple napkins throughout the meal but I'm impressed he gets through the first half before I've made a dent in mine. 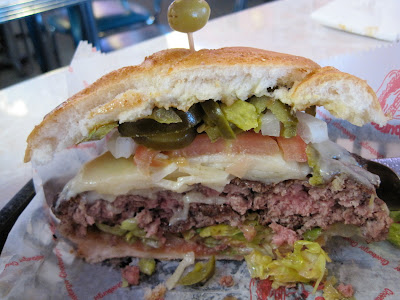 In fact by the time I've finished my somewhat normal sized meal he's finished the entire thing. Sadly I didn't get a copy of the picture they took to put on the wall but they did let him hold a giant plushie burger and announced his achievement to the whole restaurant. 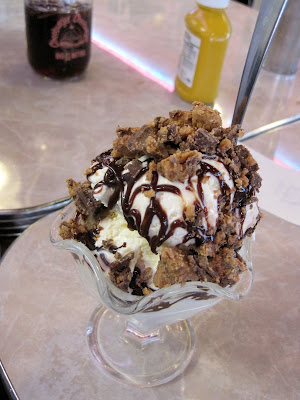 While my friend groans and leaks meat fat a little I have eaten my meal slowly and with plenty of diet soft drink so I have room for sweets. I have learnt my lesson after a few days in the US and order a child sized - the normal sundae is twice this size. It comes with just the right amount of fudge sauce and crumbled peanut butter cups. That Edy's ice cream is rich and delicious and I savour the whole thing.

Surprisingly the entire meal sits quite well on my stomach, I have sized it correctly and eaten slowly and while I have no doubt eaten a big meal it is not uncomfortable and the choice of peanut oil and high quality meat patty mean that I don't feel like I've been bulldozed by animal fat. My friend doesn't fair quite so well, his stomach bloats until he looks pregnant and spends much of the night clutching himself and groaning while I shake my head and poke his middle.

This is without a doubt one of the best most satisfying burger joints I've ever eaten at; it's not fancy or gourmet just solid comfort food done really really well. For the vegetarians they do grilled cheeses to order much the same as the burgers, and there's plenty of awesome vegan sides and tasty desserts on offer. Highly recommended, especially if you're travelling with kids or fussy eaters.

Email ThisBlogThis!Share to TwitterShare to FacebookShare to Pinterest
Like my recipes on Yummly: Yum
Labels: beef, burger, reviews, travel