On arrival into New York it was blustering snow and freezing cold. The owner of our inn had listed a number of local suggestions, however rather than the standard bistro and Italian fair on offer I opted for the very American Soul Food. 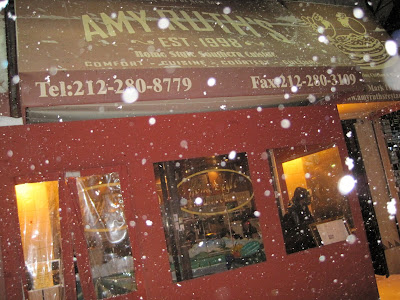 Soul Food is that "stick to your ribs" down country home style cooking popular in the Southern US states, particularly with African Americans, using a mix of local specialties and inherited African ingredients. It is warm, hearty and not particularly kind to your waist line but it is oh so good on a freezing cold day. 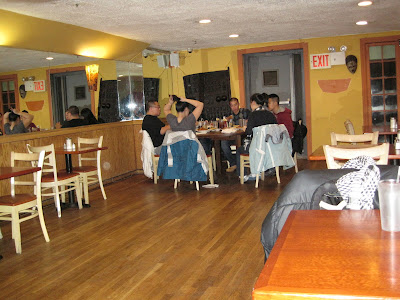 Amy Ruth's is a well established soul food eatery in New York, we'd been recommended it by a local however we discovered quickly that it is in fact listed in the Lonely Planet guidebook and is apparently often filled with tourists. Not today, today it was just shivering families and groups of local students warming themselves against the snow. 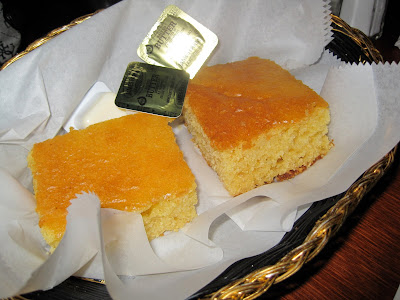 While we poured over the large menu excitedly they brought out warm moist cornbread, a quick bread made from ground corn meal. It's sweet and light and delicious with warm melted butter.

We were going to order half the sides when we discovered that our main meals came with several, hoorays! 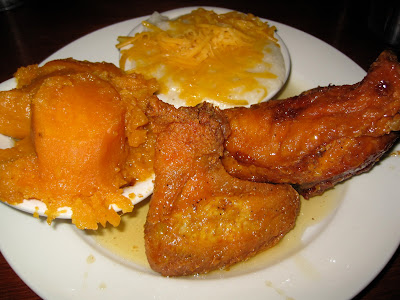 I figured on ordering something incredibly 'fitting' so this is fried chicken, dipped in honey sauce, with candied yams and grits. I've always wondered on what candied yams were but they're basically sweet potatoes, baked in a brown sugar and butter sauce. Grits are a form of corn meal porridge, it really reminds me of congee if it were made in America; and because it is, it is topped with orange 'American Cheese'. The fried chicken is large and moist and excellent, in keeping with most American portion sizes I am given no less than half a chicken for the cost of my dinner. Unfortunately I think with all the honey and sugar in the meal it was a little over powering, in future I'd be tempted to order greens instead. 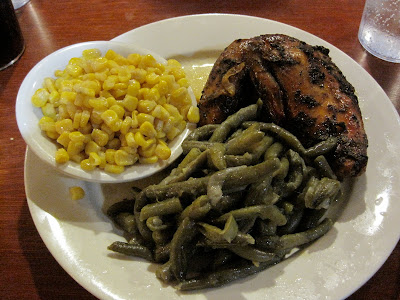 Cajun seasoned chicken (another half a chicken) is baked again to moist perfection and served with buttered beans and corn. This is about the only place I saw corn kernels as a side dish rather than ground up and put in *everything*. This surprised me, especially as I rather like sweetcorn and started to get weird cravings for it by the end of my holiday. The beans were a little on the soft side, I don't know if this is intentional or they were just over cooked, the seasoning however was tasty enough to make me overlook this mistake.

In the end the serving sizes and the heartiness of the food means that we left maybe... half the portion on the plate. But there's always room for dessert right? 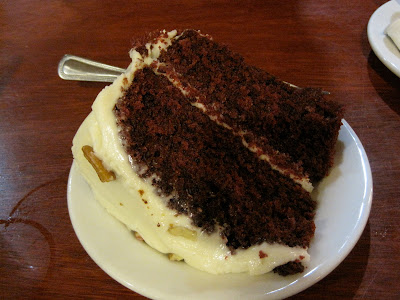 Soft soft soft red velvet chocolate cake melted under the spoon. This is easily the best plain chocolate sponge I've ever eaten in my life. I wonder the secret, it feels as though it's been triple sieved and mixed with something light - rice flour perhaps? I rather like the American way of serving red velvet cake with cream cheese icing and walnuts - in Australia this is limited to Banana and Carrot cakes, and that fact makes me sad. 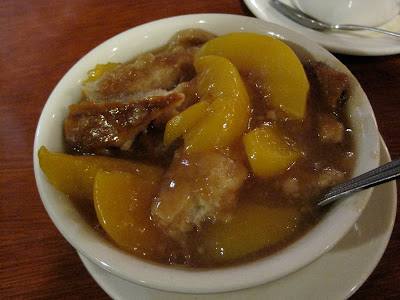 Cobblers are rather like a soft dumpling form of crumble. This classic southern dish is swimming in peach and cinnamon filling with sweet dumpling crust pieces and wedges of stewed peach. I am only able to eat about a third of the bowl before I give up and poke my rapidly expanding belly.

In the American way all the drinks seem to be endless; post mix Pepsi variants at $2.50USD tolerable coffee in an endless cup comes in at $2USD. I say tolerable because coffee in the states appears to be like their beer, weak, watery and like making love in a canoe. In all but the highest class of restaurants coffee comes with tubs of creamer or "half and half" instead of real milk.

Amy Ruth's isn't high class and it isn't sophisticated but it is damn good. On a night like this in the cold it is just perfect and warming and the staff are friendly if somewhat perplexed at the strangely accented and made up tourist taking photos of everything. Definitely recommended for a taste of the South while you're in Yankee territory.

Family atmosphere, casual dining
Posted by Amaya at 4:25 AM