It's January and that means a lot of us are eating healthy and trying to take off Christmas weight; but at least I get to look at some of the reasons why that's necessary!

South City Kitchen is a high end Southern restaurant in Atlanta offering traditional local dishes with a flourish. We went in a large group and had a set menu but it meant I got to see what everyone had to eat. The food in Atlanta is definitely "hearty" and harks back to days when Georgia was an agricultural center of the South. It's sticky gooey comfort food as far as the eye can see and while I might need to run a few extra miles this month it sure was worth it! 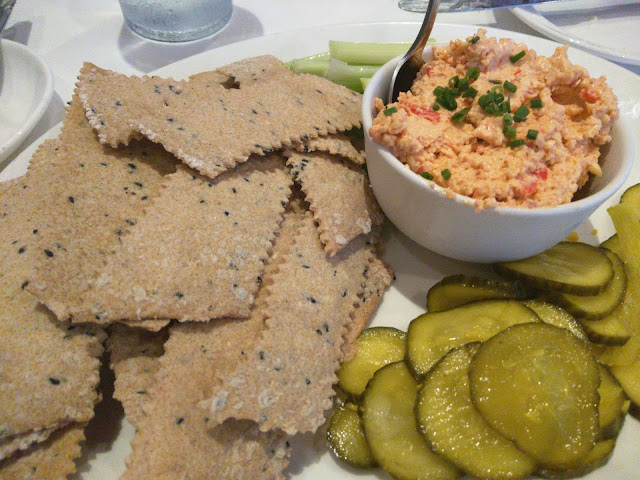 Pimento cheese is one of those American things I don't understand. Sharp cheese is mixed with bell peppers and mayonnaise. This is a good rendition of the dish but I think this requires a little nostalgia. The pickles and benne seed crackers were very good though. 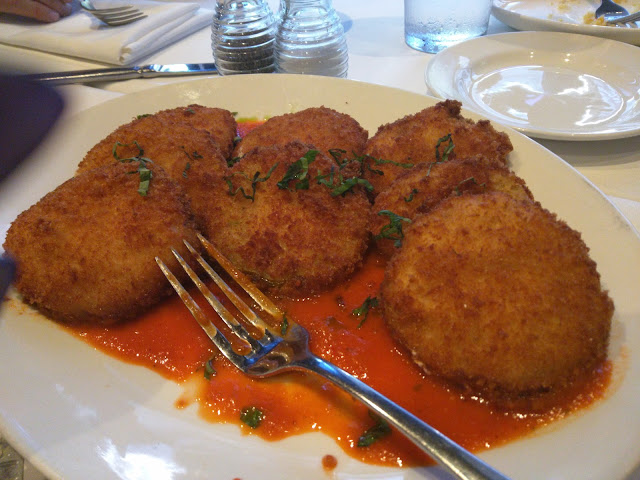 Stuffed with goat cheese and served with a sweet red pepper coulis this is a morish vegetarian delight that pairs great with cold beer or white wine. 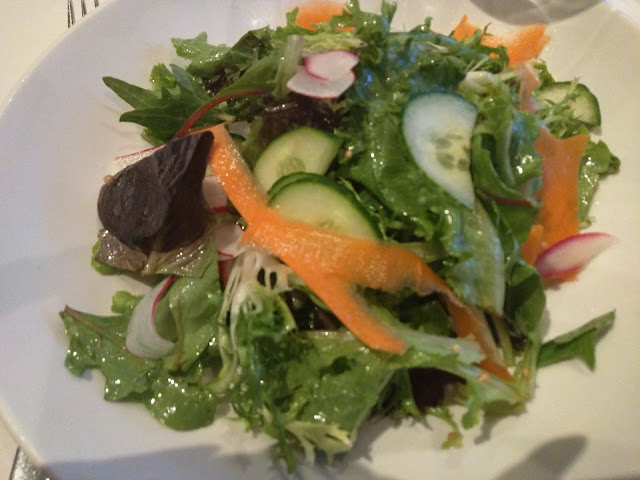 All the fried food in Atlanta really needs some greens to cut through it. This was a good simple side salad with fresh vegetables and a light vinaigrette. 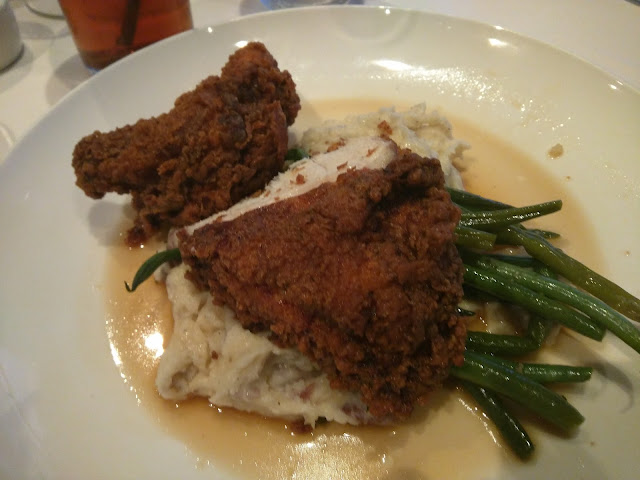 Boy do they know how to make fried chicken in these parts. Brined in a buttermilk bath overnight and then dipped in a slightly spicy batter then fried. The chicken was crisp and the oil not too heavy, great with mash and beans for a simple Southern delight. 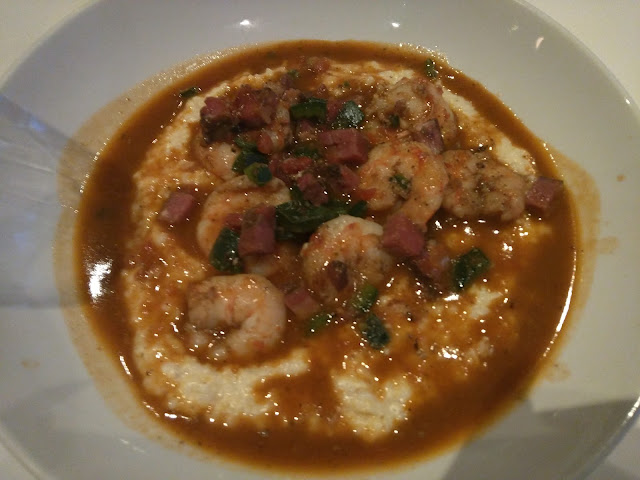 Shrimp and grits is another very American traditional dish that was unknowns to me before moving to the US. Grits are a corn based porridge similar in taste and texture to polenta made by boiling ground corn. Some grits is made with "hominy" which are corn kernels treated with alkali and give a slightly chewy texture. Shrimp and grits comes with grilled or fried prawns and a gravy often made with pork belly or porcetta. 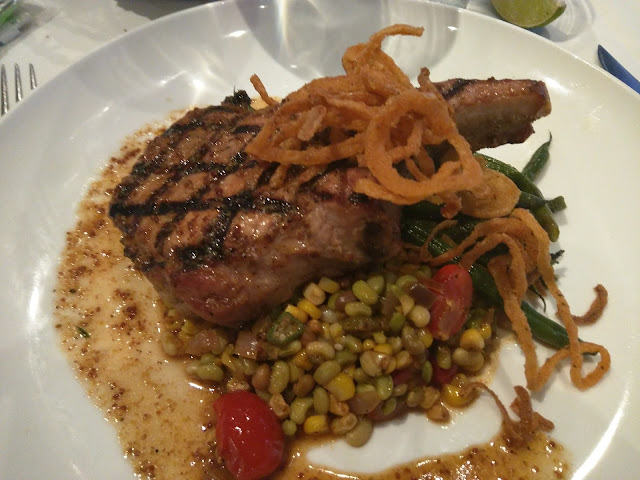 A very hearty double thick pork chop was basted with a Georgia peach relish and grilled to perfection served over a succotash of corn and beans. The sweet glaze was to die for and this dish was just amazing but we could have easily shared one between two people. 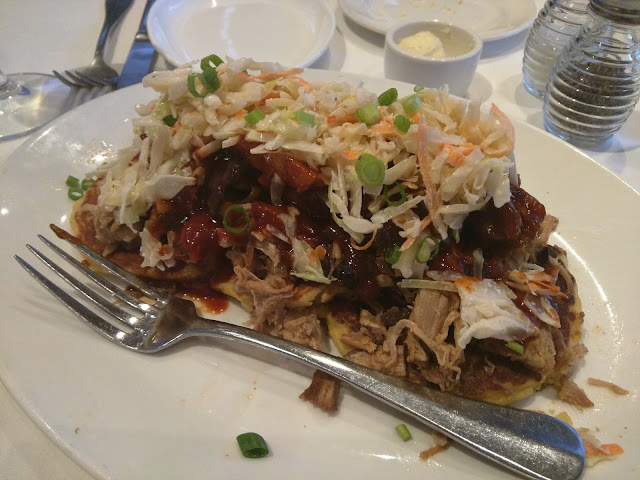 This was a main meal sized version of what is usually an appetiser so the serving size may vary. The hoe cake is rather like a vegetable tortilla that soaks up the juices from the meat. Served with a sticky BBQ sauce and cut through with the tangy slaw. Yum. 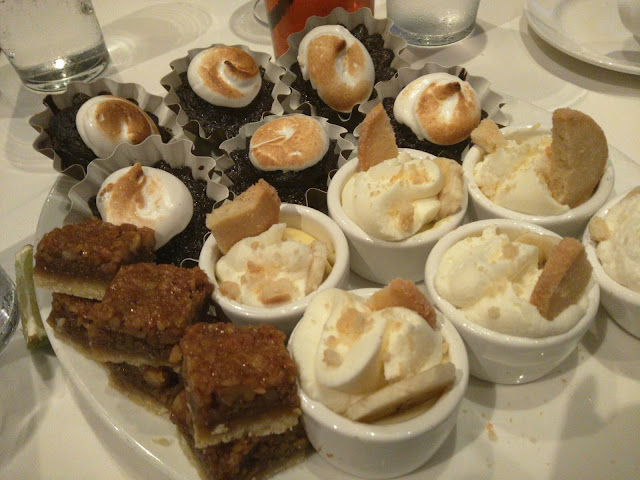 We got a sampler plate of tiny versions of these desserts but I'm not going to lie after smothered chops and fried chicken most of us could not eat dessert and a lot of the plate went lonely. Sticky and very sweet desserts seem to be common in the south but I love the user of Buttermilk and custards which give a surprising lightness and destract from all the sugar.

South City Kitchen came well recommended by many and to get a good sample of Southern cuisine it was a great choice. The restaurant was buzzing but the service was excellent. I would definitely avoid eating lunch before hand though.