As a foodie it's hard not to get sucked into watching Top Chef. The judges are well versed in the food world, the contests are well constructed and the calibre of contestants higher than any other food related show on television.

Which is why when we were in New York it was absolutely imperative that we stop at Craft Tom Colicchio's signature restaurant. It's worth noting that we had also been interested in booking for Craft Steak however it was booked for a month solid! 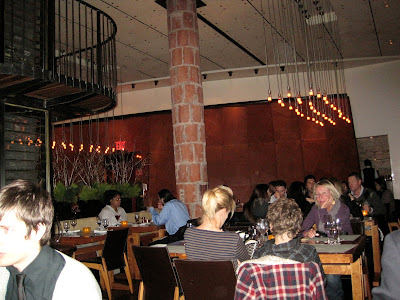 We booked rather late and on a cold night and so the warm and understated interior was very warm and welcoming. For a well known eatery it lacked the sort of snobbish over done interior design that can come with it.

The staff are excellent and the service unparalleled. There are meals that you spend money on and feel duped, this is not to be that meal. The entire time we are waited on with graciousness and attentiveness. Our questions are answered, our additional requests responded to and the sommelier takes to ensuring I am given time to photograph all the wines. Later they even give me a copy of the menu to take home as a souvenir and a small spice cake to take home and eat the next day.

What better way to sample a chef's palette than with a tasting menu? The degustation here is $110USD for 7 courses plus petits four and $75USD for matching wines. 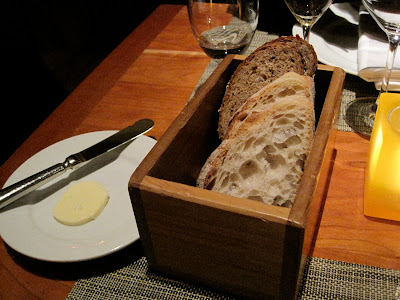 Bread and butter - complimentary with service

Good quality heavy artisan sour dough bread is served with room temperature French butter and olive oil for the lactose free. They're on to a good start. 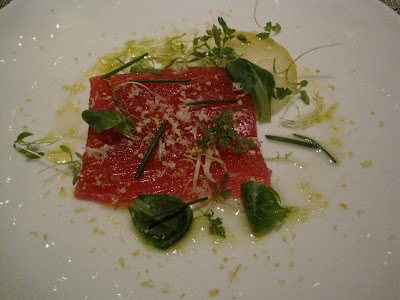 I often joke about the obsession with raw food that seems to strike America frequently but this is nonetheless wonderful, and my passion for raw tuna is well documented. Despite my preference for fatty belly style tuna this meaty cut is excellent and shines on the plate. 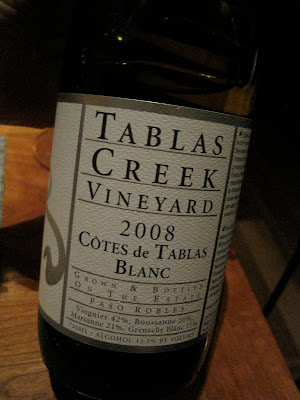 Only in America huh? A very unique blend of Viognier, Roussanne, Marsanne, and Grenache Blanc; I mean I like varietals but Tablas Creek really seem to believe that if one varietal is good then four must be excellent! Drinkable but I think an interesting idea gone wrong. 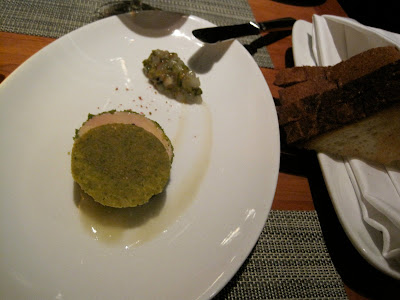 I am unable to stop myself, there is a liver parfait on the menu and I insist that they alter the tasting menu to accomodate. Terrible I know, but liver, she is my mistress. Besides the alternative dish was snails and turbot, neither of which I am inclined to. The texture on this parfait is amazing, I am still unable to place the fat that they've to get it to this consistency very thick and creamy at room temperature. I suspect a combination of duck and pig, but will settle for a bit of mystery so long as my taste buds are sated. 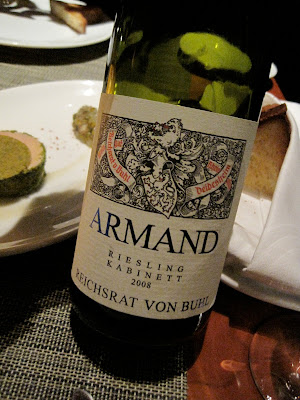 I am not particularly inclined to Reisling but it goes well with the pear paste and I grumblingly accept the pairing. At least it's actually German and lacks the pow! of Australian Reisling which leaves me sour faced. 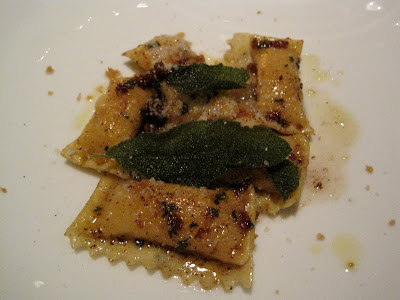 There doesn't seem to be large amounts of the guanciale in the dish but it is smoked and flavoured with it in the oil and the pasta is divine, a real win. 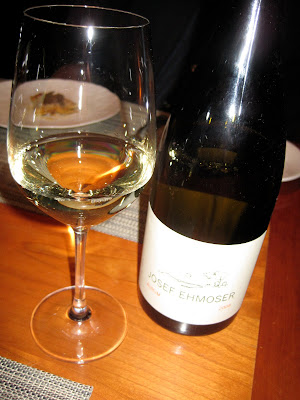 Another unusual Germanic varietal this is an Austrian Gruner Veltliner it is more subtle than the Riesling and has a freshness that suits the oily pasta. 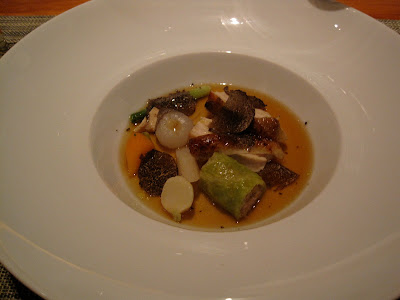 I am generally one to discourage the use of truffle in dishes because it is a luxury that is lost on me, like serving fine champagne to a beer drinker. This dish however is the exception the broth is heavenly and I chase the spoon around my bowl when I am done. The truffle compliments without overpowering and genuinely enhances the whole dish rather than being a standout flavour as is so often the case with truffles. Particularly noteworthy is the cabbage roll in the dish. 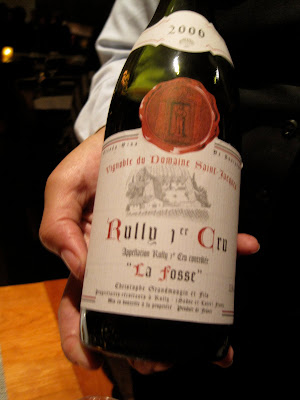 If you served anything but a French wine with a Bresse chicken I would have had a little foodie tantrum. While the choice of a Pinot from Burgandy leaves me a little perplexed nonetheless a Pinot with Poulet de Bresse and Truffles will always ring true on the tongue and the age is just perfect for drinking. 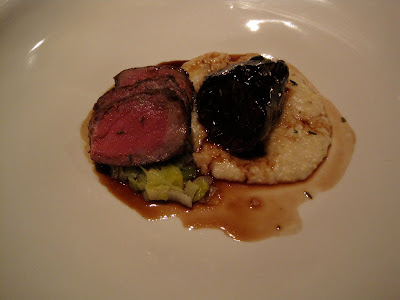 While I'm still very staunch on the comparative quality of wagyu in America and at home nonetheless this dish is a delight and a true American classic. The tabacco sauce goes perfectly with the slow braised beef, the grits are a comfort food classic and the texture of the entire dish is warm, smooth and sexy. 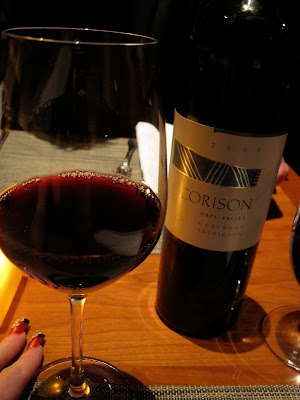 Such a strong dish as beef cheeks and tabacco sauce requires a wine with a lot of punch and a long nose. I would of course always gravitate towards an Australian Shiraz but this Napa classic is just as good! 10 years of cellaring have been kind to the stronger soil and the chocolate flavours combine well with the tabacco. 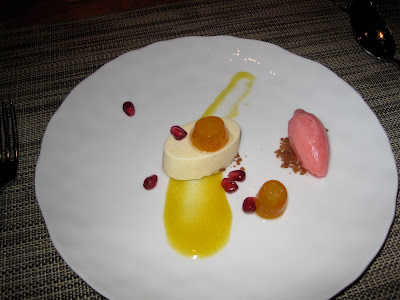 The semi freddo is deliciously rich and the citrus sorbet cuts down on the fat and leaves just the right balance of flavours. 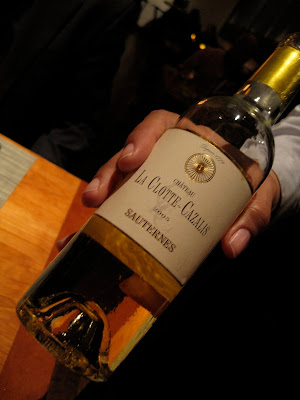 Given the other Germanic wines I was expecting an eiswein but instead this is another French this time from Bordeaux. This is a traditional Sauternes - which is a Semillon botrytis dessert wine, far less syrupy than the Australian counterparts. 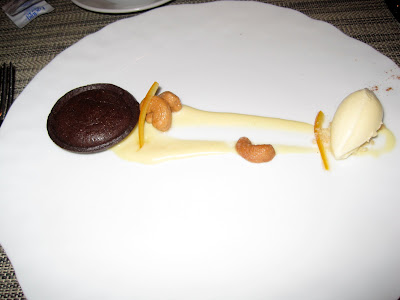 Chocolate is not my vice however this buttermilk ice cream is definitely stroking my buttons. As a "down" note at the end of the meal it is an excellent end on the nut and chocolate flavours.

And this is me after all, what degustation could be complete without a coffee and a digestive? 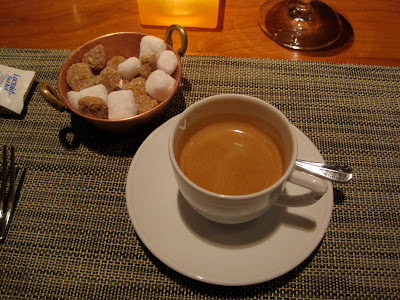 Good quality espresso (which you beg for in America let me tell you) served with your choice of raw sugars. 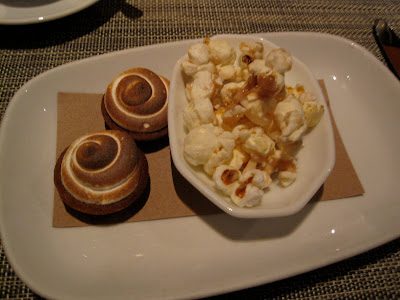 Without prompting we are also brought petits fours of salted caramel popcorn and mini lemon mirangue. So heavenly we fit it in despite being gluttonously full. 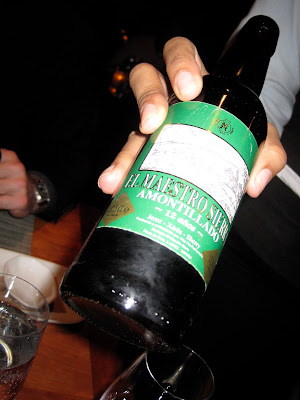 I grew up in a Spanish family, every meal should end with a good sherry or a cognac (preferably both). I am glad to see this Spanish Sherry on the menu, I was fearing for hispanic new world digestives I would not like. A good quality standard Palamino amontillado.