Once upon a time I lived in Newtown with all the myriad of wonderful late breakfast cafes available to that part of town. Leichhardt has plenty of eateries but not so many actual cafes, but we've been missing Sunday brunches and so we're on a mission to find the perfect brunch venue in walking distance of home. 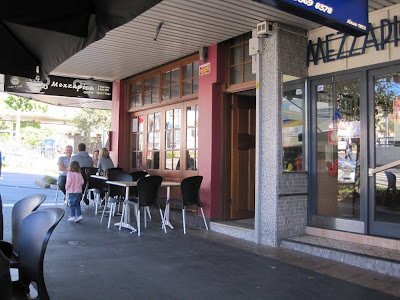 We'd gone on the strength of them advertising Corn Fritters on a street sign the previous weekend, they are a particular favourite of mine and I was really looking forward to it. On arrival we found it was a once off and they didn't have them, nor apparently the ingredients in the kitchen to make them off menu (?!).

Evidently the girl who lives next door to the cafe treats it as her living room, she kept noisily wandering between the table and her front door and the wait staff were mucking about with her somewhat innappropriately in front of the other customers and at a volume that was entirely distracting. We had to fetch our own menu from inside after waiting some time at a table, though admittedly a waitress did eventually come out to take our order, she did not however fix the wobble in the table or bring us cutlery. Not a great start. 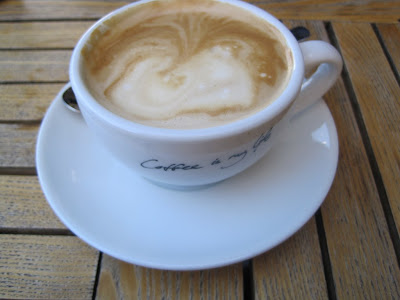 The coffee itself was fine, a nicely generic Giancarlo espresso, however the soy milk they used in my flat white was god awful. The temperature was quite cool also, often I leave my coffee for a few minutes before drinking, in this case I drank it straight after serving. The boy's latte was distinctly average but with real milk not as offensive as my own. 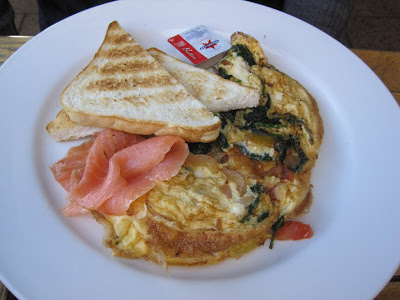 The salmon was additional and the dish was quite bland, it would have been forgettable without the addition of both salmon and salt. An average but not exciting omelette. 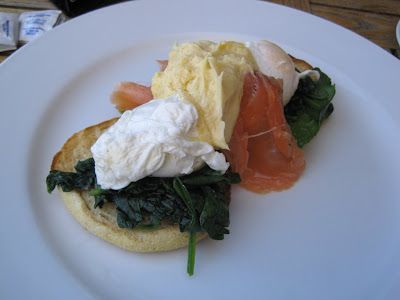 I honestly think you could put hollandaise on a bathroom sponge and I'd eat it, so I still enjoyed the dish. The sauce was thicker than I like and I suspect it was premade in a larger batch, but well balanced and tangy nonetheless. The poached eggs could have been a little less cooked for my taste but the salmon was fresh and good quality for a breakfast cafe, the spinach well cooked and the muffin not overly greasy. My biggest complaint was that the meal sat heavily on my stomach due to the rich sauce and made for a difficult walk home.

After the slightly flat meal we discovered they only take cash, something we were not informed of on entering or ordering. Luckily I had cash on me, but my boyfriend's breakfast treat turned into a meal I shelled out for making it a little more sour than it already was.

Don't get me wrong it wasn't *bad* and I'd still attend ifyou were invited there but it's just a very average cafe and a very average breakfast. We shall be trying other brunch venues over time, I feel no need to return to this one.

No bookings taken
Family atmosphere
Cash only
Posted by Amaya at 1:32 PM

Email ThisBlogThis!Share to TwitterShare to FacebookShare to Pinterest
Like my recipes on Yummly: Yum
Labels: breakfast, cafe, coffee