Sydney has differing Asian communities to where I grew up which leads to some interesting cuisines that I don't have much experience with but I have come to know and love Korean food. 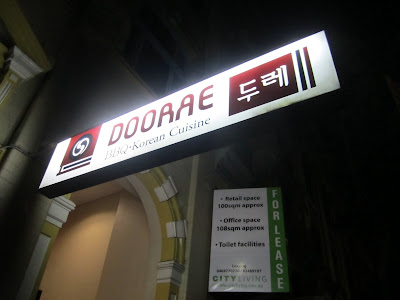 Doorae is one of the many ssam Korean BBQ restaurants in Sydney and is conveniently close to the Red Oak beef cafe on Clarence St, making it perfect after a few drinks. That being said Korean BBQ is perfect drinking food anyway, plenty of pickled nibbles, meat, salad and fruit wines! 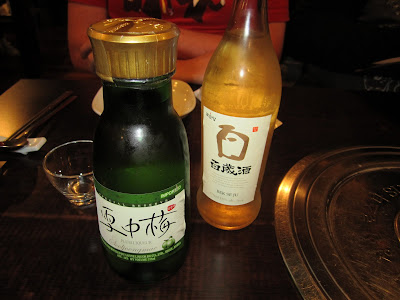 Plum wine is a definite weakness of mine, the Korean version is lighter and dryer than the Japanese umeshu making it perfect in Summer or in the heat of the table BBQ. This Seoljungmae brand has become the default version sold at most restaurants in Sydney, sadly they do not have the "gold" version which comes filled with green picked plums.

Soju is too tart for my tastes, it's like a rougher stronger version of the Japanese shochu, like drinking cheap grain vodka. Nonetheless my friends drink it merrily by the glassful. Thankfully Korean standard is to also serve a large bottle of cold water with all meals as the short sharp shots of alcohol are deadly without it. 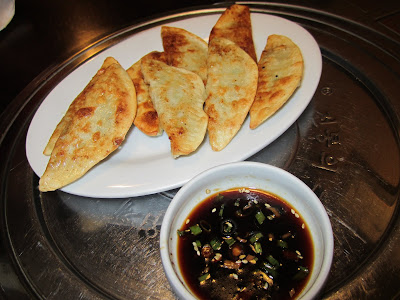 Dumplings are one of my all time favourite foods and these fried snacks don't disappoint. They're fried in light oil with a thicker pastry than Chinese jiao zhi, filled with minced meat and glass noodles they're the perfect drinking snack. 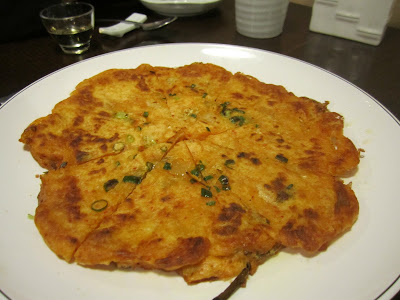 'Jeon' just means fried things and this one is a fried Korean pancake similar to a chong you bing (scallion pancake) in Chinese cuisine, however pancakes are usually more heavily laiden with fillings in Korean cooking. This one is mixed with kim chi to give it a vinegared chilli taste that brightens the pancake to a bright orange colour. The taste is excellent but I admit that I'm used to Korean restaurants serving much larger and more perfectly rounded jeons than this version. 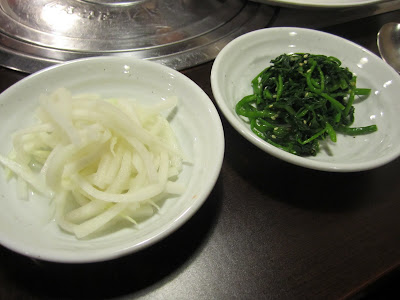 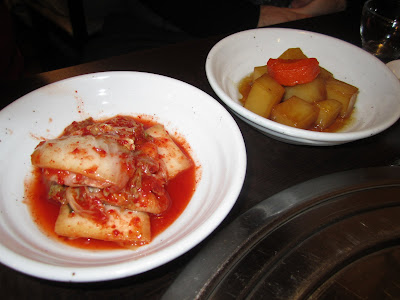 Most ssam restaurants will bring small dishes (banchan) to accompany the meat included in the price of the meal, some of the better ones in Sydney will also refill these endlessly. Here pictured is Miyeok muchim - dressed seaweed, Musaengchae - raw white radish cut into stripes, Baechu kimchi - Pickled and spiced cabbage leaves and Gamja namul - glazed sweet soy simmered potatoes. 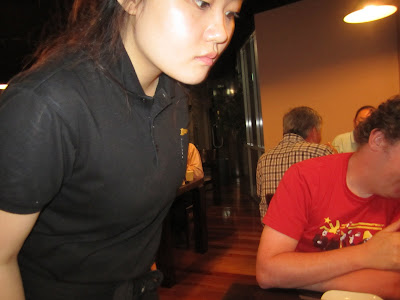 As this is a BBQ restaurant we order fresh meat which is then grilled on a coal fueled hot plate set into the table. I like to grill it a little at a time as we talk and drink however some restaurants don't like patrons to do their own BBQing and the serious looking woman who comes to turn our meet confirms that this is indeed a restaurant such as this. 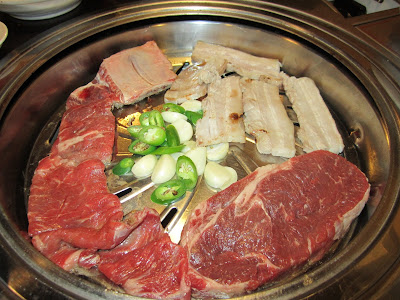 I absolutely love beef cooked in the Korean style, and the kalbe marinated short rib is a must at any Korean BBQ. The lean meat from across the flank is left attached to the rib and can be rolled out like a carpet on the grill rather than smaller strips of meet left along the rib as with American style BBQ. Of course a good quality fillet steak is thrown in for good measure.

Pork belly also done on the BBQ is marvelous in these thin fatty strips which caramelize in the intense heat to give a sweet and salty taste despite the relatively quick cooking time.

The meat is eaten laden with ssam sauce - a thick umami heavy paste made from fermented miso beans wrapped in fresh lettuce leaves which are welcome in the heat. It's rich and heavy food however and I am soon full.

Sadly Doorae does not have any sweets on the menu and I am not in the mood for the cold buckwheat noodles that traditionally finish such a meal so instead I settle on more fruit wine. 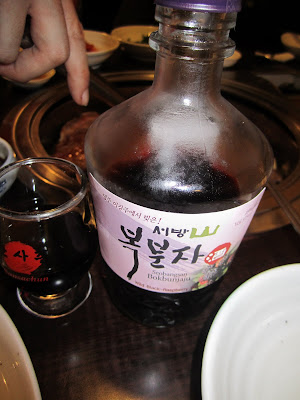 I've never tried this Blackberry wine before but I shall be having it again. Ice cold after the hot meal it's a great finish to the evening, sweet without being overpowering.

The service at Doorae is much like many similar Korean restaurants - efficient rather than friendly, though they gently attempt to tell us when we are attempting to order too much alcohol at once without being rude so I think this is merely cultural difference rather than any kind of rudeness.

I prefer not to eat at any ethnic restaurant not filled with people of that ethnicity and Doorae is no different, it seems mostly to be filled with Korean families having celebration meals.

The environment is nice, if not lively, and I would say that Doorae is a comfortable but not excellent example of the cuisine. If you're in the vicinity or can't handle the loud erraticness of Shinara or BBQ City this is definitely an option but I wouldn't go out of my way to come here.